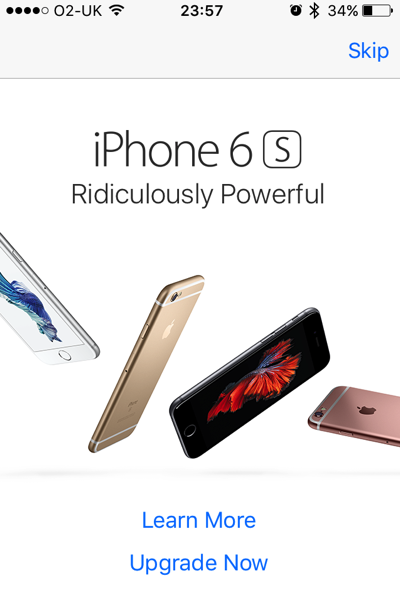 According to a report by CultOfMac, Apple is pushing an unsolicited pop-up notification to owners of older iPhone handsets, in an apparent effort to boost its holiday iPhone sales. The source notes that an ad appears when users with iPhones older than the iPhone 6 visit the App Store, telling them how “ridiculously powerful” the iPhone 6s is. The advert (shown above) is seemingly not tied to the new iOS 9.2 upgrade, since users of older iPhones with iOS 9.1 have also reported seeing the ad.

If users choose the “learn more” or “upgrade now” prompts, they are redirected to the relevant sections of Apple’s website or Apple Store app, where they can read more about or purchase Apple’s newest handset. To return to what they were doing, users must tap “skip.”

Apple has rarely used such aggressive piece of marketing in the past. In fact, most people don’t react well to intrusive advertising like this, which means this could well backfire for Apple, especially if the company makes it a more regular habit of promoting its products using such popups in future.

Have you noticed the ad popup on your iPhone? Do you find it intrusive?

Apple reportedly wants an easy way for people to build augmented reality apps, that might even be assisted by the company’s Siri voice assistant, reports The Information. Unnamed sources say Apple plans to let Siri build an AR app when asked through its upcoming mixed-reality headset. These apps would then be able to submit to […]
Gary Ng
50 mins ago