Apple’s stock price suffered a sudden drop amid reports that the company had reduced iPhone production for the next quarter. The exclusive report from the Japanese Nikkei claims that Apple made that decision in the light of slowing iPhone sales (via Business Insider). 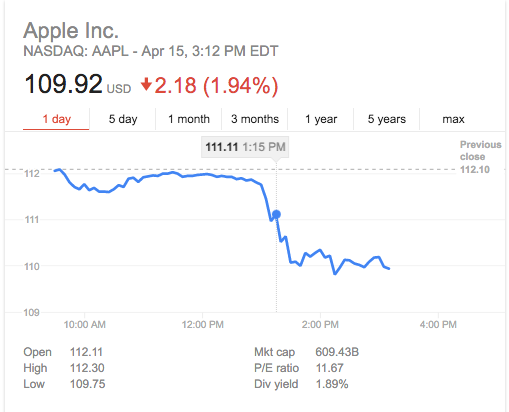 Ever since the iPhone 6s and 6s Plus were launched, various reports have claimed Apple would fail to beat the sales records set by the iPhone 6 and 6 Plus (when it went with 4.7-inch and 5.5-inch displays). The “s” update wasn’t enough to make this device appealing, those reports claimed.

Now, Nikkei’s supply chain sources claim Apple had to adjust inventories and lower production for the first calendar quarter by about 30% compared to the same period a year previously.

Another highlight of the Nikkei report is that Apple doesn’t plan to produce large volumes of the recently introduced iPhone SE, which some analysts predicted would offset high-end iPhone sales. That won’t be the case, it seems.

The slowdown in iPhone production will likely hurt Japanese parts suppliers such as Japan Display and Sharp, Toshiba (memory chip provider), and Sony, the company supplying image sensors for the device.