Apple’s stock price has hit a new record high today, closing at $502.60 per share. During today’s trading the stock high an all-time high of $503.83 per share. It was only last week that shares surged beyond $490 based on speculation of an impending iPad 3 announcement in March (which was again today rumoured for March 7th). 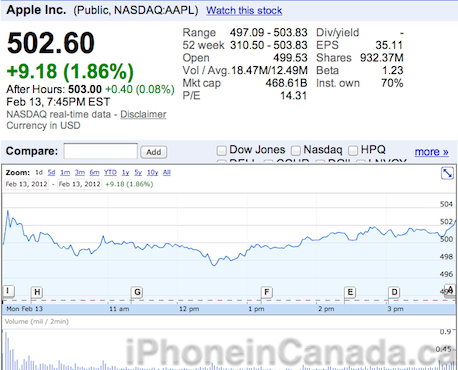 Apple’s market cap is now at $468 billion, a jump of almost $10 billion in less than five days, and remains the largest company in the world by valuation, exceeding second place Exxon Mobile by $69 billion. Given the intense speculation of an iPad 3 with a higher resolution Retina Display being announced in just over three weeks, there’s no limit as to how much higher the stock could grow.