What makes it even cooler is that the first 1000 visitors will get themselves a FREE Apple t-shirt! Did somebody say free t-shirt? It’s a great way to generate traffic, by giving out a freebie. If I’m up that early on Saturday, maybe I’ll swing by and test my luck! 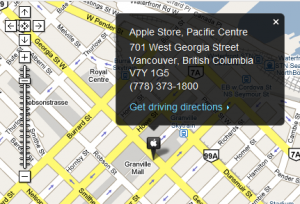 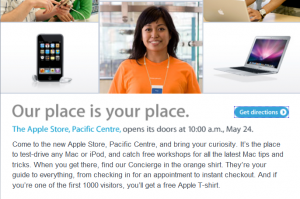 I also was contacted by another anonymous “source” that claimed things are being tested now for the iPhone, live testing to come later this month, and testing in the field for the next few weeks. The release date being speculated is most likely to be around the WWDC June 9th date, with those previous September launch dates being put to the curb.

Also, I was contacted by a Senior Manager of one of Canada’s largest electronic retailers regarding my previous post about the iPhone coming to Canada in July. Not sure about what the concern might be, but it might be due to the fact that some of our “rumors” might be closer to the real deal than you think! We’ll have to wait and see, yet again, right? 🙂 Stay tuned, as I’ll be sure to keep you posted.

Anyone in Vancouver going to line up for a free T-shirt on Saturday? Maybe I’ll see you there in line!