[Update] Apple Store Opening in Downtown Vancouver on Robson and Burrard in 2012?

Update 1: According to BiV:

A source close to Apple Inc. (Nasdaq:AAPL) has told Business in Vancouver that the computer company is slated to take space on Robson Street halfway between Burrard and Thurlow streets.

The location would be slightly west of the future Forever 21 location, which is under construction and named Robson Galleria.

It appears Apple has plans to open another Apple Store in downtown Vancouver for 2012. This new prominent location will be at Robson and Burrard, the former home of HMV and the Virgin Megastore (RIP CDs) and current home of CTV, notes ifoAppleStore. We’ve heard some whispers of Apple contemplating this location before from you guys.

Apple is set to occupy the lower level (23,000 sq ft), ground floor, and second level (16,000 sq ft), for a rough total of 39,000 square feet. The location will be the first street level Apple Store in Vancouver. Other locations are located within malls, such as nearby Pacific Centre (home of the city’s first Apple Store since 2008), only 500 metres away. This very well could be the closest proximity of two Apple Stores in the world. 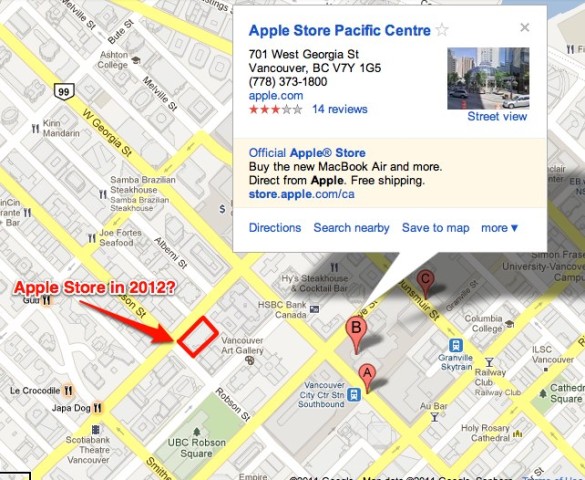 The current structure is a designated heritage building, and Apple is known to build stores within iconic sites with lots of history. The latest store set to open inside Grand Central Terminal in New York City comes to mind.

If an Apple Store does open at Robson and Burrard, it could very well emerge into one of the busiest stores around. The foot traffic from Robson Street, located in the heart of downtown Vancouver’s shopping district would be a prime location for Apple.