It’s been a long time coming but Vancouver finally has an Apple Store! It’s the first Apple Store in Western Canada and yesterday’s grand opening had a huge turnout at Pacific Centre in downtown Vancouver. What helped build the buzz for Apple? Well, for starters they were giving out free Apple t-shirts to the first 1000 visitors to the store.

Sounds like a great idea to line up for a t-shirt right? Wrong! I arrived at Pacific Centre at 9:30am, but the line ups had already started hours before we had arrived! It was outside the mall and starting to go around the corner. Turns out the first person in line showed up at 5:45AM! Now that’s what I call hardcore Apple-Fan-Boy dedication baby!

Leading up the 10AM opening time, the Concord Security guys were in full effect, giving everybody a hard time even if you so dared to walk within the entrance of the store. They were directing traffic away from the front of the store. Seconds away from 10AM, the lights inside the Apple Store dimmed. Then simultaneously the lights went on the and the gates were drawn! Voila, welcome to Vancouver, Apple!

It was just pure craziness I think for people to line up to get a glimpse of Apple Store in Vancouver history. I mean it’s not like you’ve never seen a MacBook Pro or iPod Touch before (think Future Shop, Best Buy, London Drugs, etc)! The line ups extended long outside and around the building. I understand if Apple was giving away free iPods or something–but for a t-shirt inside a pretty white box? It boggles my mind! But to each their own, right? 🙂

Missed out on this morning’s Pacific Centre Apple Store festivities? Check out my video compilation of the event! Now just imagine the craziness once the Apple iPhone will be available from Rogers. Let’s keep our eyes and ears peeled for the June 9th WWDC!

Pictures: Clockwise starting top left: closely guarded t-shirts, happy Apple fanboys, entering the store, line up of geniuses. Did you get your free t-shirt? How long did you wait in line for? Email me a picture of it! 🙂 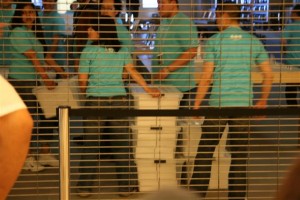 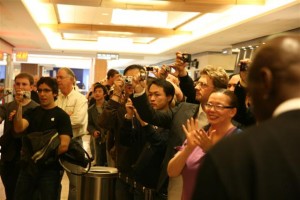 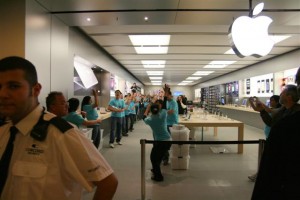