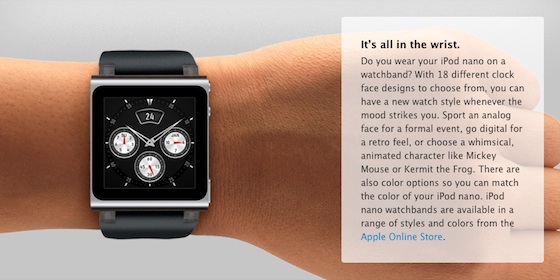 Nick Bilton over at the New York Times again reports Apple is testing prototypes for a curved glass device, akin to a smart watch:

In its headquarters in Cupertino, Calif., Apple is experimenting with wristwatch-like devices made of curved glass, according to people familiar with the company’s explorations, who spoke on the condition that they not be named because they are not allowed to publicly discuss unreleased products. Such a watch would operate Apple’s iOS platform, two people said, and stand apart from competitors based on the company’s understanding of how such glass can curve around the human body.

If such a device is coming, it could utilize a thin bendable glass technology from Corning, an existing Gorilla glass supplier for the iPhone. The flexible glass known as Willow Glass has been in development for over a decade, says Pete Bocko, the chief technology officer for Corning Glass Technologies:

“You can certainly make it wrap around a cylindrical object and that could be someone’s wrist,” Mr. Bocko said. “Right now, if I tried to make something that looked like a watch, that could be done using this flexible glass.”

The report says Apple CEO Tim Cook has been interested in wearable devices as he has been spotted with the Nike FuelBand, and one Apple employee said vice president for technologies Bob Mansfield has a similar interest in wearables.

One other interesting tidbit within the article was the mention of the late Apple CEO Steve Jobs’ ambition to build an Apple car before he died, as told to John Markoff of the New York Times.

Back in December of 2011, Bilton released a similar report detailing a small group of employees were working on prototype wearable devices able to send and receive data from smartphones.

The Wall Street Journal has also weighed in today on the speculation a watch-like device could be coming from Apple:

Apple Inc. is experimenting with designs for a watch-like device that would perform some functions of a smartphone, according to people briefed on the effort.

Foxconn, as Hon Hai is known, has been working on a spate of technologies that could be used in wearable devices, one of these people said. In particular, the Taiwan-based company has been working to address the challenges of making displays more battery-efficient and working with chip manufacturers to strip down their products. The technologies are aimed at multiple Foxconn customers, this person said.

Last December, a Chinese report rumoured Apple was working with Intel to create a Bluetooth enabled smart watch, aimed to hit markets in the first half of 2013. Earlier this week, Apple’s former head of its Human Interface Group detailed his thoughts on the potential of an iWatch.

Given the massive popularity of the Pebble watch Kickstarter project, it is clear customers are keen to acquire wearable devices able to project data from their smartphones. Start putting aside money for the iWatch, it could be coming soon.