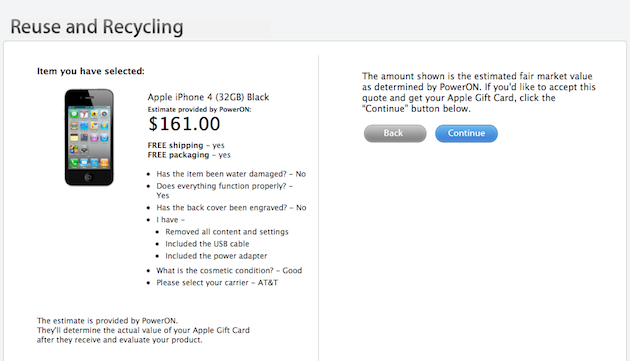 Apple is said to start an iPhone trade-in program as early as this month, with the aim of getting upgrades and boosting sales by taking in older models, reports Bloomberg.

Bloomberg mentions this move as a premiere, but this isn’t the complete truth: Apple had already started a program to accept iPhone trade-ins back last August (US only), which could be worth up to $345 in Apple Store credit for a used iPhone 4 or 4S. This was happening ahead of the iPhone 5 launch.

By partnering up with mobile phone distributor Brightstar Corp., Apple’s intention is to make upgrading to the latest model easier than ever. In the US, AT&T currently pays $200 for an iPhone 4 or 4S, which allows users to purchase an entry-level iPhone 5 with a contract without the need to use their credit card.

This also means Apple is about to boost its secondary market, since according to Bloomberg’s sources the collected used iPhones will be resold in emerging markets, where the demand for iPhones are high, but Apple’s share is low.

The Web recycling program is run in partnership with PowerON Services Inc. The new partnership with Brightstar allows the company to run this trade-in program in Apple’s retail stores, with instant payments. This eliminates the hassle of shipping the old gadget.

Microsoft has revealed the first wave of Xbox Game Pass titles arriving on the service throughout October 2022. Kicking off the month, many of the games capture the spirit of the spooky season, leading into Halloween. This month, Xbox Game Pass subscribers can gain access to brand new titles available day and date such as...
Steve Vegvari
42 mins ago