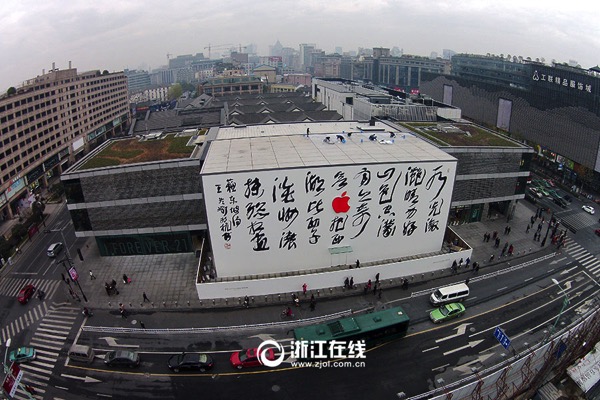 The Chinese market is so important to Apple that it is opening brick-and-mortar stores at a breakneck speeds. In an interview with the Chinese Xinhuanet, Apple’s head of retail, Angela Ahrendts, said the company will open five new stores before the Chinese New Year this year.

The news comes after Apple took its first shot: It opened the first of the proposed five stores last Saturday in Zhengzhou. The next one, West Lake Apple Store, is scheduled to open on January 24 in Hangzhou, Zhejiang Province, near Shanghai. As you can see on the above picture, the store covered with an expansive poem created by a noted calligraphy artist, as highlighted by iFoAppleStore.

In her interview with Xinhuanet, Ahrendts said that Apple’s biggest challenge in the country is hiring enough employees while maintaining the company’s customer service standards.

According to information shared by Ahrendts, Apple has increased its staff in China by 75% since 2012. The total number of employees now stands at 3,700. While she kept mum about the locations where the other three stores will open, sources speaking to iFoAppleStore confirmed the opening of a second store in Chongqing and Hong Kong (Canton Road).