CoreBrand yesterday released their 7th annual Top 100 list of the World’s Most Powerful Brands and Apple ranked in the 10th spot, the most highest ranking tech brand.

Apple jumped eight spots compared to last year’s rankings report and is trailed by Microsoft (+11) and Facebook (first timer). Apple rival Samsung is in the 68th spot (+8), while BlackBerry is in the 149th spot (+21) and Google is in the 33rd spot (+17). Amazon.com was the biggest riser jumping 25 spots in one year.

Below is how CoreBrand determines their powerful brands list:

Our research into powerful brands, called the Corporate Branding Index®(CBI), focuses on a metric we call BrandPower. It is an aggregate measure that represents both the size (Familiarity) and quality (Favorability) of a company’s brand. In one metric, we capture the breadth of, and sentiment toward, a corporate brand.

Check out an image of the top 15 brands below: 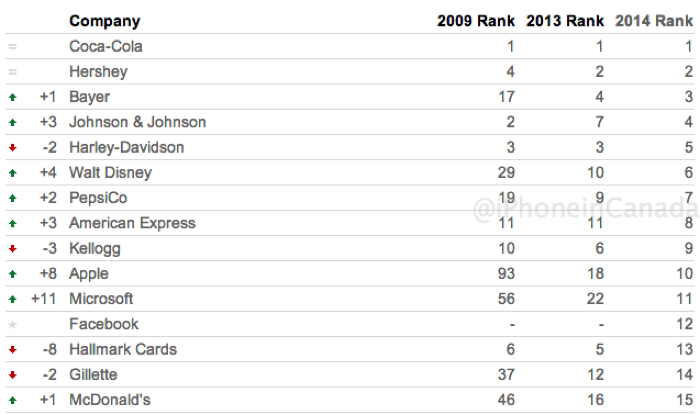 The top brand three years running since 2009 is Coca Cola with Hershey in second place.

In February, Brand Finance ranked Apple as the world’s most valuable brand.