Following Apple’s US efforts that remind customers and shareholders that the company has created or supported almost 600,000 jobs for the US worker – from engineers to the delivery guy – the company is highlighting similar European figures on its European websites. 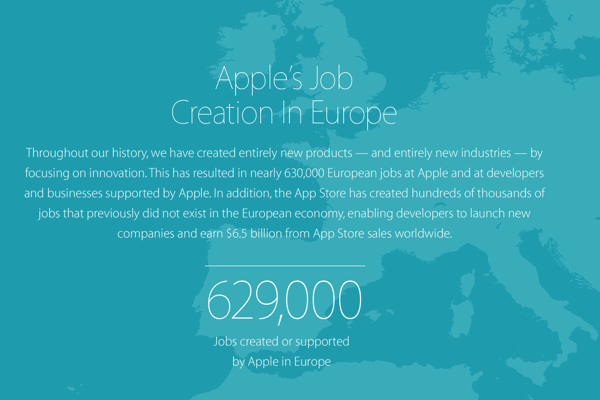 Throughout our history, we have created entirely new products — and entirely new industries — by focusing on innovation. This has resulted in nearly 630,000 European jobs at Apple and at developers and businesses supported by Apple. In addition, the App Store has created hundreds of thousands of jobs that previously did not exist in the European economy, enabling developers to launch new companies and earn $6.5 billion from App Store sales worldwide.

As noticed by the Wall Street Journal, Apple has published a page that targets European users from several countries, including the UK, France, Germany, and Italy. The page emphasizes Apple’s efforts to create jobs in Europe.

The company highlights that it has 16,000 employees in Europe, and since the app economy was born, it has contributed to the creation of roughly 500,000 jobs on the old continent. Going further, of the $20 billion developers have received as payment from Apple, about $6.5 billion went to European developers, the company says. 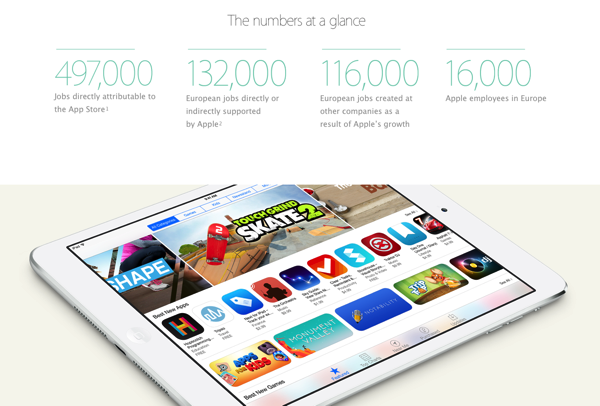 As the numbers published on the Web page reveal, Apple has 280,500 members registered in the paid developer program, and estimates about 21,000 iOS developers jobs available now in Europe alone.

The report also puts its Cork headquarters in the spotlight. The company has grown its workforce to about 4,000 employees, accounting for roughly 10% of Apple’s worldwide corporate employees, excluding Apple retail.