Apple has finally put a spam-filtering app “Do Not Disturb” on its iOS App Store, months after Indian regulator Telecom Regulatory Authority of India (TRAI) threatened to ban iPhones in the country. 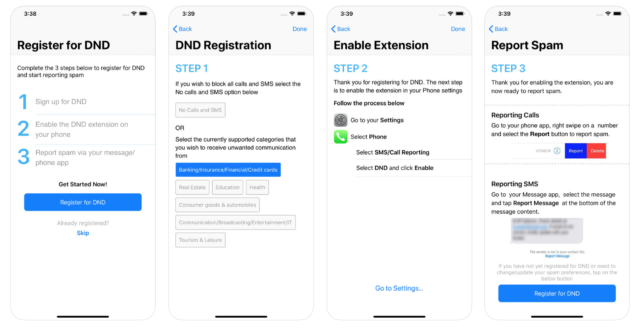 A new report from VentureBeat explains that the app, called “TRAI DND-Do Not Disturb”, aims to help Indian users curb unsolicited marketing phone calls and text messages, an issue that has become hugely problematic in the past few years.

Back in July, Apple faced an impending iPhone ban in India if it did not comply by January 2019 with the region’s telecom regulator, TRAI. However, the Cupertino company wouldn’t allow the app to be released to iOS users, citing privacy concerns, though it agreed to cooperate on a version of the app that wouldn’t share a user’s call or message logs with Indian authorities.

“With that deadline fast approaching, an Apple spokesperson in India has confirmed that the app became available today in the iOS App Store,” the VentureBeat reported late on Friday. The app, called “TRAI DND-Do Not Disturb”, aims to help Indian users curb unsolicited marketing phone calls and text messages, an issue that has become hugely problematic in the past few years.

The new TRAI DND app has two major functions – users can register their mobile number under DND (Do Not Disturb) using this app and second is reporting spam calls/ SMS after DND registration.

“Registration of mobile number under DND (Do-Not-Register) will take up to 7 days after putting the request with a respective telecom service provider (TSP),” the App Store listing describes the app.

The TRAI-DND app is available for free from the iOS App Store. It requires iOS 12.1 or later.