Apple TV App on Xbox Consoles Might Be Coming Soon 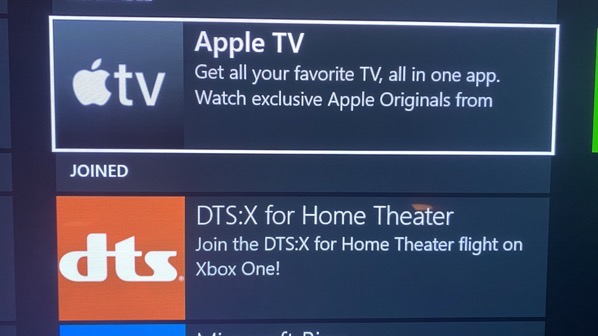 Apple appears to be working with Microsoft to bring its Apple TV app to Xbox consoles, if a recent screenshot is to be believed.

According to Windows Central, the Apple TV app is apparently in beta testing on a “limited pool of testers on Xbox consoles,” which the site says they were able to verify with sources.

User @Tzunami_Sapp shared a screenshot last week showing the Apple TV app apparently from their Xbox console. “OhSnap! #AppleTV is coming to #Xbox!!! Now I’m not as upset about them removing the second HDMI port cuz that’s all I used it for. But now we get 4k! #XboxInsiders”, said the user.

Another Twitter user claiming to be a Rockstar employee also said online an Apple TV app is apparently coming as well.

As a Rockstar games employee, i can confirm that Apple and Microsoft are working to bring an Apple TV app to Xbox consoles

We’ll have to wait and see if the Apple TV app makes its way to Xbox consoles or not. Apple has slowly expanded its TV app to various smart televisions, including those from Samsung, LG, VIZIO and Sony. Other streaming devices such as Roku and Amazon Fire TV also have the Apple TV app.