TV Everywhere is the business Apple is targeting with the revamped Apple TV device next Wednesday. Adobe found that TV Everywhere “is a juggernaut”, and is coming whether the market is ready or not. In numbers: TV Everywhere content viewed on set-top boxes such as Apple TV and Roku has grown 63% on a year-over-year basis. 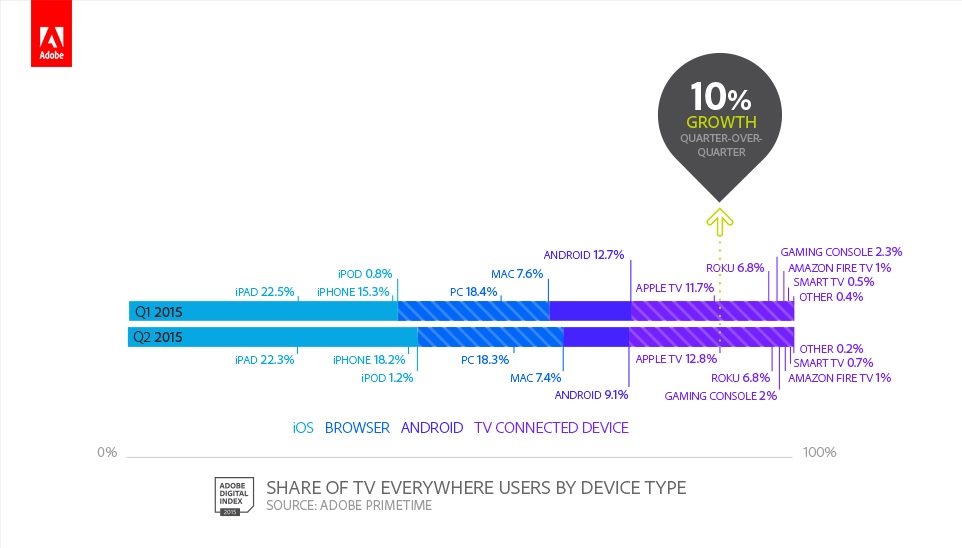 Fact is, Apple is already well positioned in this market: According to the study, Generation Z (the plural/post millennial generation) are dropping iPads for connected devices such as Apple and Roku. Generation Z are consuming a significantly higher amount of content: Viewer frequency of teens and toons content via connected devices was up 81% year-over-year and is now six times higher than the average viewing frequency of other (also popular) types of content.

Going further, the study found that the iPad was the most popular device for viewing TV Everywhere content, accounting for 22.3% of the overall devices used. The iPad was followed by PCs with 18.3%, while the iPhone grabbed 18.2%, and Apple TV, 12.8%.

As a result, Apple accounts for 61% of TV Everywhere viewing and hence already dominates the market.