Remember the days of the Nintendo Wii and smashed out TV sets because someone wanted to serve just a bit too hard playing tennis in Wii Sports?

During the on-stage demo of the new Apple TV, we questioned whether a strap accessory would be available, almost tongue in cheek, thinking back to the days of the Wii.

Apple TV remote is being swung like a Wii controller. Does it come with a wrist strap?

Well, it looks like Apple has taken this into consideration, as The Verge reports Apple will have a new Remote Loop accessory available for purchase:

According to Apple’s press materials, though, the Remote Loop isn’t part of the remote. It’s an accessory sold separately. 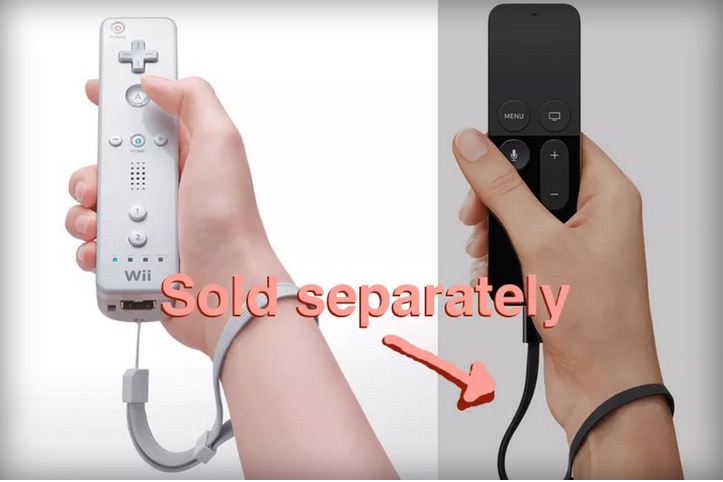 The loop looks to attach via the bottom Lightning port, which then secures to your wrist. So when you’re swinging the remote while gaming with sweaty hands, the loop looks like the last line of defence to prevent the controller from flying into your TV or into the family pet.

The Apple TV remote connects via Bluetooth 4.0, but also includes an IR receiver, which looks to help manage controls for your TV, receivers and more.

Apple TV is set to launch in late October in “over 80 countries” (most likely Canada too), priced at $149 USD and $199 USD for 32GB and 64GB models. Earlier today, tVOS beta was released to developers to allow them to start modifying their apps for Apple TV.