Last May, Apple launched two-step verification in Canada, part of a second wave of launch countries to gain access to the added security feature.

Now, it appears Apple is rolling out the security feature to iCloud.com, as spotted by an AppleInsider reader: 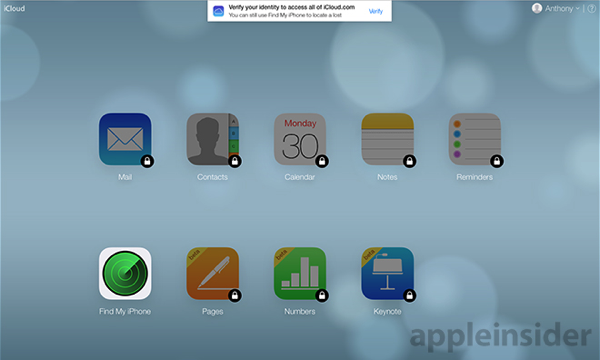 With the new implementation, shown in the screenshot above, Apple is expanding its two-step authentication security feature beyond Apple ID management and iCloud-connected features to the iCloud.com Web app suite. Prior to the change, iCloud.com was accessible via a simple password.

Once two-step verification is enabled, all iCloud.com web apps except for Find my iPhone will require a verification code to be accessed.

We logged into iCloud.com with our Canadian Apple ID and were unable to see prompts to enable two-step verification as of writing. The delay is probably because we’re Canadian, eh?

Let us know if this is popping up for you on iCloud.com.

Ian Scott, chairman of the Canadian Radio-television and Telecommunications Commission (CRTC), told the House of Commons Industry and Technology (INDU) committee that he was once the victim of an e-mail spoofing scam — reports The Globe and Mail. Apparently, bad actors were able to impersonate Scott's e-mail address an undisclosed amount of time ago. The...
Nehal Malik
11 mins ago

Tesla and SpaceX CEO Elon Musk will purchase Twitter again with his original terms at $54.20 per share, as revealed yesterday in a surprise u-turn. The decision comes ahead of Musk’s scheduled deposition starting tomorrow and his October 17 Supreme Court case in Delaware with Twitter, as the Tesla leader originally wanted to renege on […]
Gary Ng
24 mins ago