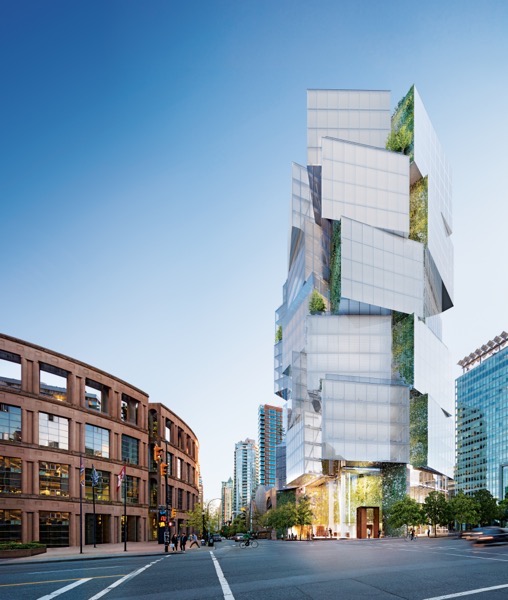 Westbank’s 400 West Georgia tower under construction in downtown Vancouver is set to gain a new occupant: Apple. According to Bloomberg, Apple will open an office in the tower, which is expected to be completed in 2020:

Apple Inc. plans to open an office in one of Vancouver’s most hotly anticipated developments, according to people with direct knowledge of the matter.

Cupertino, California-based Apple will join Deloitte LLP and IWG Plc’s Spaces co-working unit as key tenants in 400 West Georgia, a 24-story office building that is owned by Westbank Corp. and Allied Properties REIT, said the people, who asked not to be named because the information isn’t yet public. The firm will take up about two floors, one of the people said.

The tower is being designed by Michael Sypkens and Esteban Ochogavia. According to Westbank’s website, here’s the design ethos of the tower:

Michael and Esteban’s brief study led to a completely different approach to the typical glass box. Rather than a single extrusion, they found that multiple, smaller extrusions could achieve the same density. The smaller extrusions became weightless glass cubes that were haphazardly placed on top of each other. To com-plement this aggregation of abstract cubes, we introduced verdant landscapes to unify the staggered aesthetic. As a result, the building evolved into a scaleless sculpture of cantilevering volumes and vertical gardens.

This isn’t the first time we heard Apple will be occupying office space at Westbank’s tower. Back in October 2018, Daily Hive reported Apple had landed office space at 400 West Georgia. This Bloomberg report essentially reaffirms the report from last fall.

The location is across the street from an old Canada Post building set to be the home of a future Amazon office, spanning 416,000 square feet, also set for completion in 2020.

An Apple office location in Vancouver would add a presence for the iPhone maker on the westcoast, while its only other headquarters in Canada are located in Toronto, Ontario.