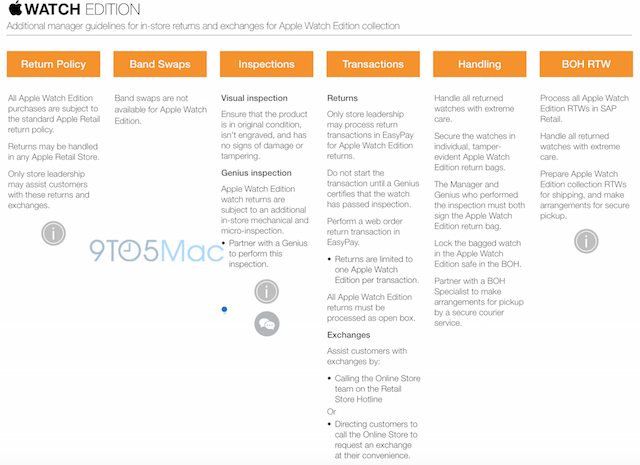 According to a new report by 9to5Mac, Apple will require special micro-inspection of the Apple Watch Edition by the staff at the Apple Store before initiating any return / refund process for the 18-karat gold smartwatch. The report claims that a Genius Bar staff member will inspect the Watch with special tools, including microscopes and a gold weight scale, to ensure that no gold has been removed from the Watch to be sold on secondary markets.

“When an Edition is brought into the store to be returned, the Watch will first be visually inspected by a member of the floor staff to ensure that the luxury device is in proper condition and is not cracked nor engraved.

The source also adds that even though Apple has put a special return process in place for the Apple Watch Edition, the refund timeframe will be the standard 14 days like other Apple products. However, only Apple Store managers will be able to process Apple Watch Edition returns, and the process can only be initiated once the device is approved for return by the trained Genius Bar staff member.

Meanwhile, exchanges can be handled over the phone with the Apple Online Store team for all three models of the Apple Watch.