When Apple first announced the Apple Watch — back in September 2014 — it only said that its pricing would start at $349. That started an avalanche of pricing guesses, speculation. Now that the prices are finally public — and it turns out that John Gruber was right — Asymco’s Horace Dediu has taken his time to analyze Apple’s pricing strategy, which differs quite much from its previous models.

As he points out, previous pricing strategies were typically structured around storage differences (the 64 GB iPhone is more expensive than the 16 GB iPhone). That changes with the Watch, since we don’t have any official storage information (rumours say 8 GB). Apple instead went with differentiating the models by size, materials, and bands. The chart below shows the pricing of the Watch models with and without the Edition. 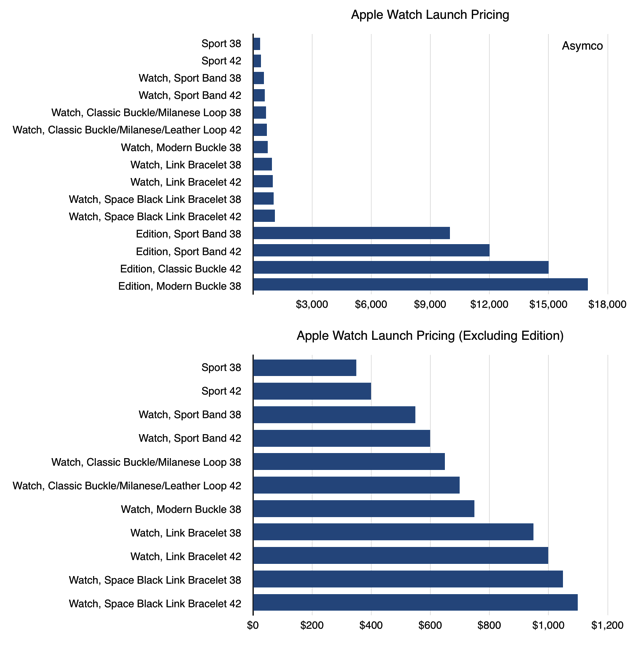 So what’s the path Apple followed with this one? Well, as always, Apple has used a little trick with its pricing model: it gauges the perception of value. Using perception is how prestige branding has always worked, Dediu highlights, so there is nothing new under the sun.

This is where one can take cues from the existing market. Gold is costlier than steel but the pricing difference is greater still. Multiplying $1000 (cost) by 10 (to get a price) yields far more profit than multiplying $1 by 20. This perception of Gold as being worth it is far beyond its utility–a perception which has taken centuries to build. What Apple is doing with Watch pricing is simply leveraging existing perceptions of value for materials and using them to capture profits for an otherwise purely functional product.

You may have already noticed that technology products are high-priced at launch, but their value diminishes rapidly afterwards. Apple, however, has managed to do what others could not: it was able to “stretch to cover the perception of value for design, materials, craftsmanship, and prestige.”

We’ll see how the Apple Watch resists the test of time.