Jonathan S. Geller, the founder of BGR, has shared a recent incident where the Apple Watch Series 4 potentially saved his father’s life by altering him of a serious heart condition in the middle of the night. 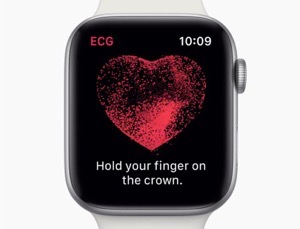 Geller’s father, who apparently fell asleep with his Apple Watch on and woke up in the middle of the night with some chest discomfort, was alerted by the Watch that Atrial fibrillation had been detected. When he noticed that his heart-rate was also elevated, he decided to take an ECG by putting his finger on the digital crown.

He took multiple ECG readings and every time it came back with the same message: Atrial fibrillation detected. He then rushed straight to the hospital where the staff performed an ECG confirming that he indeed was having Atrial fibrillation:

A couple of hours later, after seeing his cardiologist, he is now wearing an at-home heart monitor for two weeks and is on some light medication.

Thankfully, my father should be fine and hopefully will continue to pester me with technology questions for years to come.”

Although Geller’s father was proactive in opening the ECG app on Apple Watch, the device had been passively checking for any irregular heart rhythm including low, high, and atrial fibrillation, ultimately alerting him of a potentially life-threatening condition.