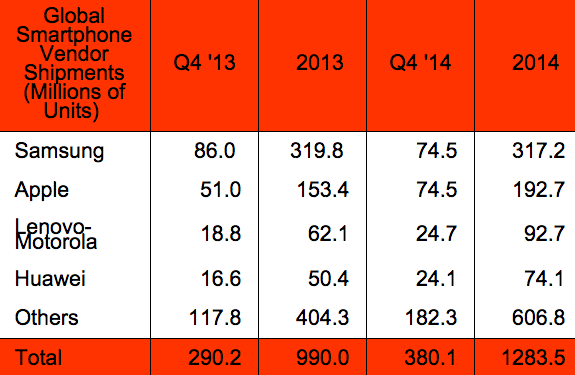 Apple saw an 18 percent increase in smartphone marketshare compared to the year ago quarter, while Samsung plunged 30 percent in marketshare in the same period. 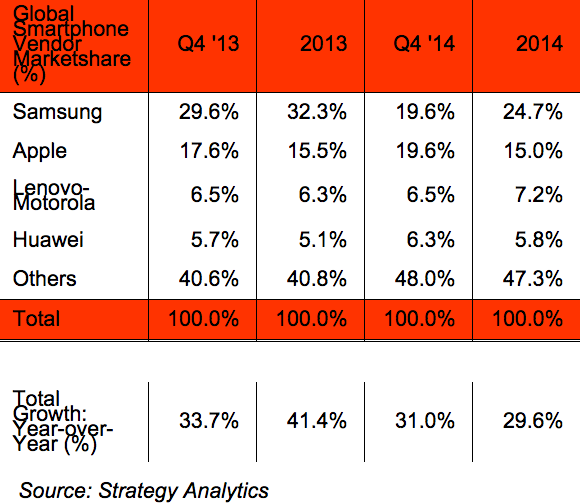 Amidst increased competition from Chinese smartphone makers such as Xiaomi and intense pressure from Apple’s high-end iPhone 6 lineup, Samsung’s Q4 2014 earnings resulted in its mobile division seeing a whopping 64.2% drop compared to a year ago, declining from $5 billion to $1.8 billion.

Apple reported the largest profit in a single quarter in corporate history, earning a net $18 billion, thanks in part to a record 74.5 million iPhones sold, led in part by its newest iPhone 6 models.

Samsung, on the other hand, did not disclose smartphone sales figures in its Q4 2014 earnings, but only said shipments declined, along with tablets as well.

If we are to believe data from Strategy Analytics as seen above (CIRP data corroborated the numbers), Apple has quickly caught up to Samsung, tying the latter in marketshare for the quarter, which hasn’t happened since Q4 2011.