Apple and Samsung continue to lead the global smartphone market, with 14.1% and 21.7% shares of the market, respectively, according to the latest data from International Data Corporation’s (IDC) Worldwide Quarterly Mobile Phone Tracker.

Looking back to the second calendar quarter of 2015, IDC found that shipments represented the second-highest quarterly total on record, with 337.2 million units shipped, up 11.6% from a year ago. Interestingly, the volume increase was driven by the abundance of affordable handsets, which means the smartphone market continues to diversify, said Melissa Chau, Senior Research Manager with IDC’s Mobile Phone team.

As for Apple, we already know that this was its best fiscal third quarter ever, with 47.5 million iPhones sold (Wall Street wasn’t satisfied, though), increasing its global market share to 14.1% from 11.7% during the same period a year ago. Apple has also gained momentum in Asia–Pacific, due to the larger-screened iPhone 6 models and the rapid expansion of 4G networks in China, the market research firm notes. 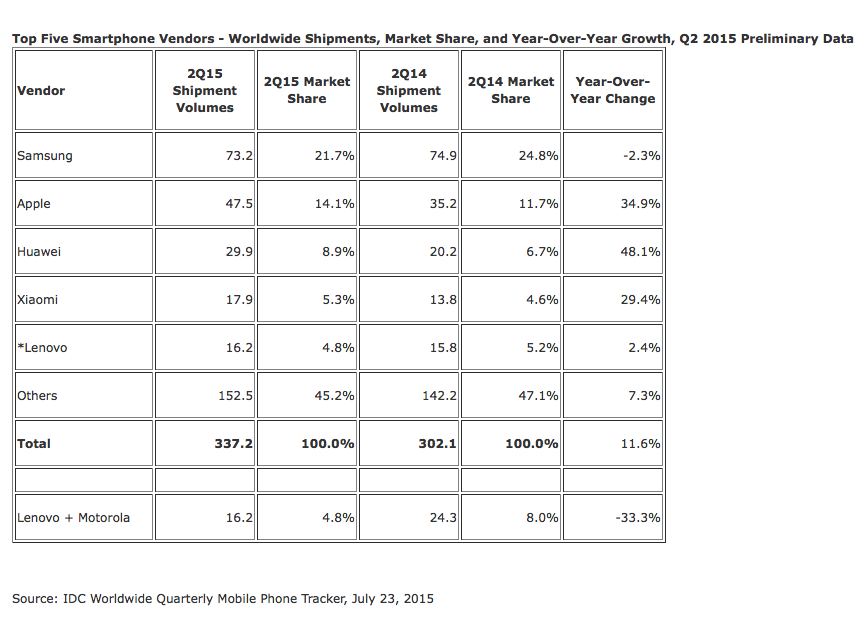 Huawei captured third place in IDC’s top five smartphone vendors list with an 8.9% share of the market, followed by Xiaomi (5.3%) and Lenovo (4.8%). The biggest year-over-year increase was recorded by Huawei with 48.1%, followed by Apple with 34.9%. Samsung was the only manufacturer on the list to post a drop in smartphone shipment volumes.