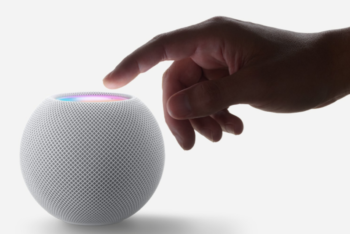 Are you going to buy the new HomePod mini from Apple? It has been discovered the HomePod mini comes with a non-detachable power cable that’s integrated into the device’s body at one end, and has a USB-C connector at the other end to be plugged into the 20W adapter that (shockingly) comes with the device, reports MacRumors.

Apple revealed the HomePod mini alongside the new iPhone 12 lineup in its October 13 event. Designed as a successor to the original HomePod, the HomePod mini is a smart speaker from Apple that is Siri-capable and provides high-fidelity audio output, with the ability to intelligently adjust audio output according to its surroundings thanks to its S5 chip (the same one used in the Apple Watch Series 5).

The HomePod mini’s power cable being non-detachable doesn’t come as a big surprise, seeing as how that was the case with the original HomePod as well. The only difference being the HomePod had a power plug on the other end, whereas the HomePod mini has a USB-C connector that could, possibly, allow the device to be powered by other devices and peripherals like power banks.

Not long after the HomePod launched, however, a Reddit user discovered that the power cable can be detached (and then reattached) if it is pulled on with enough force. Detaching the power cable revealed some kind of proprietary Apple connector at the tip.

Whether this is the case with the HomePod mini remains to be seen, but unless you have AppleCare+ for your HomePod mini, you should leave testing that out to the experts. And even if that is the case, you’re better off leaving the power cable attached as Apple warned owners of the original HomePod that removing the power cable could damage the cable or the device’s internal components.

The HomePod mini will retail for $129 in Canada, with global pre-orders starting on Friday, November 6 at 5am PST, and an official release on November 16, 2020.