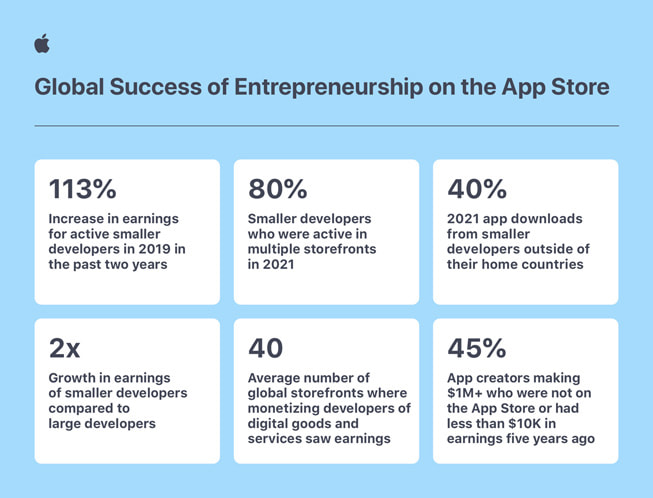 According to a couple of new research studies conducted by the Analysis Group and the Progressive Policy Institute, Apple’s App Store demonstrated significant growth in 2021, supporting more than 2.2 million jobs and increasing revenue for smaller developers active on the App Store in 2019 by a whopping 113% over the past two years.

According to the Analysis Group’s study, “Spotlight on Small Business & App Creators on the App Store,” developers saw a substantial increase in earnings over the past two years. Smaller developers saw revenue growth of 113%, more than double the increase seen by large developers.

In the U.S., smaller developers on the App Store, defined as those earning up to $1 million a year with fewer than 1 million annual downloads, saw their earnings go up by 118% since 2019.

“The iOS app economy has helped create millions of jobs — ranging from software development, to sales, to designers, and more,” Apple said. The pandemic only spurred on even more economic growth on the App Store, as more of the world moved online and the need for digital tools grew unprecedentedly.

The analyses paint “a picture of a thriving and dynamic app ecosystem where opportunities and innovations have flourished,” the company added.

The App Store has also seen record numbers of small businesses and new app creators join the ecosystem in the past couple of years. In 2021, approximately 24% of new app creators on the platform came from Europe, 23% from China, 14% from the US, 4.3% from Japan, and 34% from other regions including Korea, India, and Brazil.

Apple’s App Store gives developers and app creators access to 175 global markets. The company also promotes quality apps by featuring them on the App Store — Apple may not get it right every single time, but doing so definitely provides exposure to small businesses and emerging app creators.

In 2021, around 40% of all downloads of apps from small businesses and new app creators came from App Store users outside the developers’ home countries.

Even though the App Store is a vehicle of stellar economic growth and exposure for developers and app creators of all sizes, Apple’s iron grip over the platform (and up to 30% commission on every transaction) has become a major regulatory concern as of late.

The European Union’s Digital Markets Act (DMA), currently on its way through the European Parliament, seeks to loosen Apple’s hold on the App Store by allowing third-party payment systems on the platform, letting users sideload apps and install third-party app stores on Apple devices, and more.