The latest generation iPhone 5 accounts for more than 50% of all smartphones sold by Apple. But there was an interesting rise in sales of the discounted iPhone 4 during the past 90 days, according to a report send to iPhone in Canada by Michael Levin, co-founder of Consumer Intelligence Research Partners (CIRP). 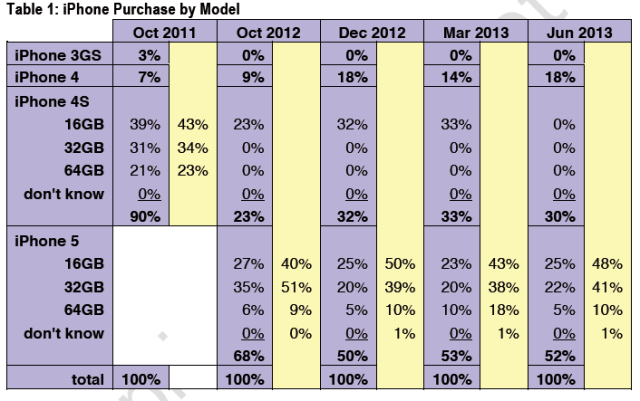 As the study points out, despite a decrease in iPhone 5 sales as consumers wait for Apple to release the highly anticipated iPhone 5S, the latest model represented only 52% of total iPhone sales. Sales of the iPhone 4S also dropped 3% in June to 30% compared to March 2013, but the discounted iPhone 4 gained in popularity and rose 4% to reach 18% of total iPhone sales recorded by Apple.

During the survey period, Apple continued to sell the iPhone 5, with three different storage capacities, along with the reduced-priced iPhone 4S and free iPhone 4. Our earlier research suggests that iPhone 5 sales, as a share of all iPhone sales, declined considerably, both relative to the initial iPhone 5 launch and in comparison to iPhone 4S sales at its launch. This current survey shows that lower-priced legacy iPhones gained some share of sales of all new iPhones. iPhone 4 increased its share to 18% of sales, from 14% in the earlier period. Also, the lower-priced versions of iPhone 5, with either 16GB or 32GB of storage, increased their share of total iPhone 5 sales.

The CIRP study has combined the iPhone 4S and iPhone sales at launch to highlight an interesting fact: while iPhone 4S represented 90% of all Apple smartphone sales in the period immediately after launch, the iPhone 5 retained only 70%. 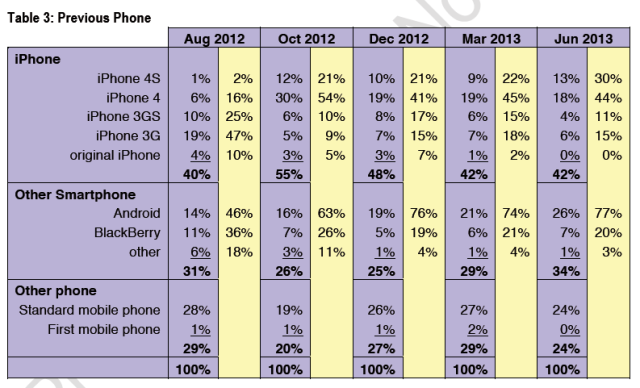 Apple continues to attract users from other platforms. According to the CIRP study, 26% of new iPhone users dropped Android in favour of iOS, up 5% from the previous 21%.

About a quarter of iPhone buyers have opted for an entry-level iPhone 5 model. The 32GB version was also popular and was the choice in 21% of new purchases.