Apple is preparing the launch of two new iPhones this September. As we know, the handsets are connected to Asian economies since the majority of Apple’s supply chain is from that part of the world. 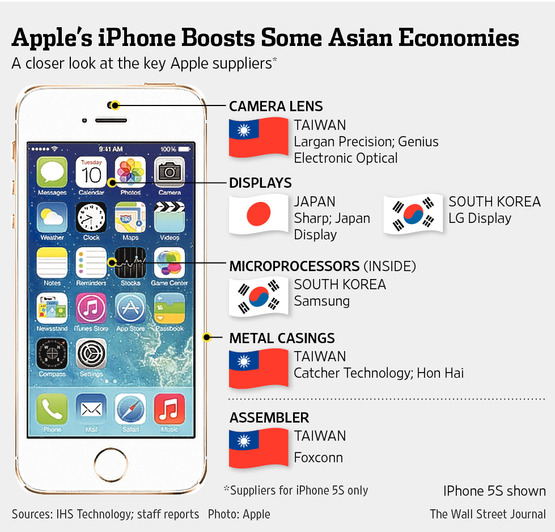 Rumours claim that Apple has increased its initial order of the iPhone 6 to up to 80 million units. Although no one can confirm that number — Apple and its suppliers won’t comment on their relationship — what is visible is the revenue that Asian companies, participants of the Apple supply chain, have reported for the past quarter.

One government official in Japan predicted Apple’s next iPhone could raise quarterly demand for the country’s electronics exports by 5 percent.

Credit Suisse estimates that Apple will pay up to $150 per iPhone for components and assembly, meaning about $26.9 billion in revenue for Taiwanese companies combined — this in light of an entry-level iPhone BOM estimated at $200.

The WSJ article points to last year’s second quarter report of Japan Display, which saw profits quadruple from a year earlier — before the iPhone 5s launched. Another example is Pegatron, which reported monthly revenue of $3.9 billion in September, before the iPhone 5c hit the stores.

As a final thought: Apple cannot completely turn economies around, but it apparently does have a major impact on the economies of its Asians suppliers, at least for a quarter.