Apple’s Jony Ive Creates (RED) Diamond Ring Worth Up to $250,000 USD for Charity 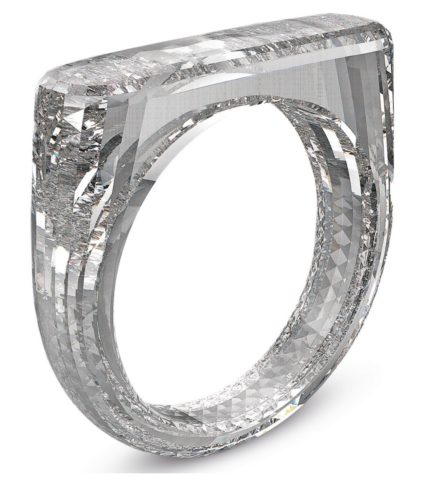 According to the Sotheby’s description:

Sir Jony Ive, Apple’s Chief Design Officer, and renowned industrial designer Marc Newson – having curated the (RED) auction five years ago – have, this year, designed a unique ring, made exclusively for (RED) by Diamond Foundry. Consistent with their mutual obsession with transforming raw material into objects of value, Ive & Newson’s design is singular, clear and un-compromised by the traditional metal settings and bands that have previously been required to create ‘diamond rings’. Theirs will be created by removing material rather than adding – an ambition made possible by the extraordinary scale of the stone which will enable the ring to be completely made of this material.

The inner ring will be cylindrically cut, with a micrometer thick water jet and laser beam. The finished product will see a ring “between 2000-3000 facets which has never been seen before in a single piece.”

The auction for this (RED) diamond ring starts on December 5, 2018, at 7PM EST in Miami, Florida.

Seems like a bargain for a diamond ring. Keep an eye on this one.

[caption id="attachment_390033" align="aligncenter" width="960"] Image: Microsoft[/caption] Microsoft on Tuesday held an in-person event in Seattle, Washington, where the company announced a number of new AI-centric innovations coming soon to its products (via The Verge). The highlight of the event was Microsoft unveiling "the new Bing," powered by a new next-generation large language model under a...
Nehal Malik
4 hours ago