Happy April Fools Day everyone. You might have noticed that we’re rebranding our site on this special day. But that news doesn’t trump what I’m going to buy my baby niece for her 2nd birthday. The fine folks at ThinkGeek have taken things to another level by getting the exclusive on the PLAYMOBIL Apple Store Play Set.

So when we spotted this amazing Apple Store Playset from PLAYMOBILâ„¢ we were admittedly in a bit of a conundrum. On the one hand, it’s a product designed for children much younger than ourselves. On the other hand, it’s a tiny representation of the store which sells us all the shiny Apple goodies we can’t resist. Then we noticed that the PLAYMOBILâ„¢ iStore includes amazingly tiny iPhones, Macbooks, and iPads. Our resolve began to waver. A quick peek at the miniature Genius Bar and we were feeling a bit woozy. Then we saw the tiny Steve Jobs presenting in the Keynote Theater on the top floor and that was it. Our wallets popped out faster than you can say Jonathan Ive and we plunked down whatever money was needed to own this amazing playset. 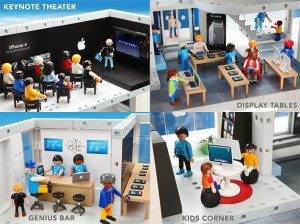 I just placed my order–and I also splurged on the ‘Line Pack’ for $49.99. Brilliant. 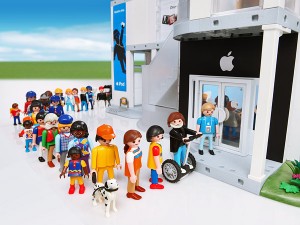