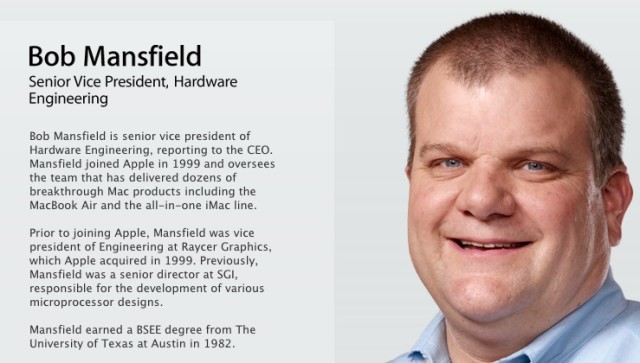 “Bob has been an instrumental part of our executive team, leading the hardware engineering organization and overseeing the team that has delivered dozens of breakthrough products over the years,” said Tim Cook, Apple’s CEO. “We are very sad to have him leave and hope he enjoys every day of his retirement.”

“Dan has been one of Bob’s key lieutenants for a very long time and is very well respected within Apple and by the industry,” added Cook. “Our hardware engineering team is the best engineering team on earth and will not miss a beat during the transition.”

Mansfield has played a crucial role in the engineering success of the Mac, iPhone and iPad and has been widely seen in the promotional videos of Apple hardware. He will be replaced by Dan Riccio, the current vice president of iPad Hardware Engineering.

Below, at the 3:40 mark, we see Mansfield talk about the LED backlighting of the 2009 unibody MacBook Pro.

[caption id="attachment_386668" align="aligncenter" width="800"] Image: Ledger[/caption] Tony Fadell, a famed product designer and former Apple Senior VP who is credited as being the "father of the iPod," has come out of his rather quiet life of investing and writing books about his career to lead the development of hardware cryptocurrency wallets at Paris-based Ledger. Cryptocurrency...
Nehal Malik
9 mins ago

Inspired by the cultural continuum of Love Languages, Peloton has today announced the launch of Motivation Languages to help people motivate friends and family to get through the busy holiday season. Peloton recently commissioned a five-market research study that found that nearly 81% of people prioritize their loved ones, with nearly half wishing they prioritized...
Usman Qureshi
16 mins ago