Planning a road trip soon? Then you’ll need a powerful USB car charger, such as the following from Aukey. Their dual USB car charger (white model) with 4.8A/24W of juice (2.4A per port) is on sale for 73% off at $7.99 and is eligible for free shipping over $25 and Prime. 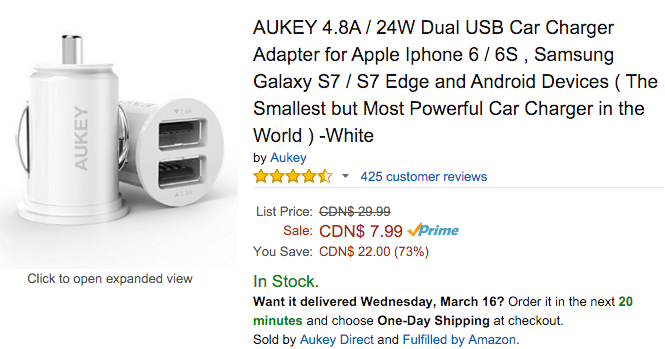 This tiny dual port car charger is powerful enough to charge your iPad, or iPhone 6/6s Plus models (works with all iOS models) as well simultaneously, while also powering your other USB devices. It comes with a built-in protection circuit to protect your devices from over-currents and more, plus a two year warranty.

I own this exact car charger and it’s another great product from Aukey. The small size is a bonus as it doesn’t look awkward unlike larger car chargers and it quickly juices up my iPhone 6s Plus, even on short trips. Even though this is the white model, it’s a bargain at $7.99, as that’s the lowest price ever for this item on Amazon.ca, according to price tracker CamelCamelCamel. This will make a great gift.

Click here to jump on the Aukey Dual USB car charger while it’s still on sale (and hasn’t sold out yet due to the RFD effect).

Last night, The Game Awards 2022 was held both virtually and in front of a live audience of industry personnel. The night was dedicated to recognizing the games and studios that helped shape the past 12 months.  Host Geoff Keighley worked with a number of publishers and development teams to pack the award show with...
Steve Vegvari
16 mins ago