An Apple patent filing titled “Collision Avoidance Of Arbitrary Polygonal Obstacles” has been published today by the U.S. Patent and Trademark Office (USPTO), which describes a basic vehicle collision avoidance system that may serve as the foundation of a self-driving car telemetry solution in future, AppleInsider is reporting. Apple’s proposed system is also capable of successfully navigating an environment without prior knowledge of the objects within. 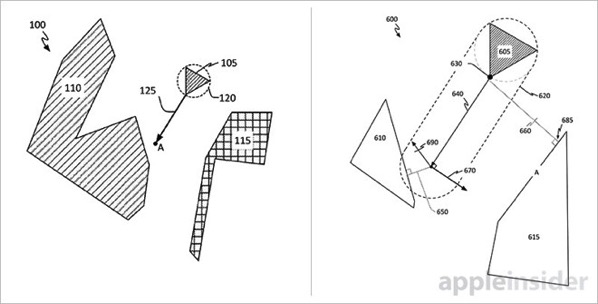 Primarily designed for robotics, Apple’s system is able to operate in both two-dimensional and three-dimensional space. The technology can be applied to avoid convex and concave objects, as well as when the obstacles are moving or stationary. For a self-driving vehicle, the avoidance mechanism can further use simple geometry to identify obstacle edges. Apple’s system is also able to detect multiple oncoming obstacles and potential collisions by comparing the edge distance against a known bounding radius.

In practice, if the edges of object within an environment are determined to be outside of a system’s bounding radius, the vehicle is allowed to continue along its original motion. When a potential collision event is predicted, the system selects the edge vector closest to the vehicle’s current position and calculates the force needed to avoid the obstacle. This calculation takes into account vehicle mass, acceleration and other vital measurements.

Once the first object is avoided, the system moves on to a next obstacle, carrying through data learned from the previous encounter.