Backbone and PlayStation have partnered to release a new Backbone One – PlayStation Edition controller, featuring colors and materials inspired by the design of the PS5’s DualSense wireless controller. 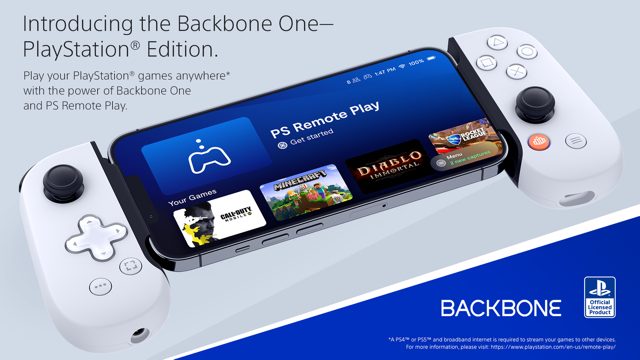 The controller feels right at home with the other products in the PS5 lineup, such as the PULSE 3D headset, which you can connect directly to the Backbone One – PlayStation Edition.

For those who aren’t familiar, Backbone One is a gaming essential for enjoying PlayStation games on an iPhone. Simply plug your iPhone into the Backbone One and start playing your PS4 or PS5 games using the PS Remote Play app.

PS Remote Play requires Remote Play App connected to Wi-Fi, and a PlayStation console with the latest system software and compatible game. Broadband internet with at least 5 Mbps is also required. For a better Remote Play experience, a high-speed connection of at least 15 Mbps is recommended.

Introducing the Backbone One – PlayStation® Edition

With the latest update for PS Remote Play, the controller even locks your iPhone in landscape orientation for better viewing. Players can download the Backbone App for a customized PlayStation experience.

Backbone One also works with App Store games and other game streaming services that support controllers, including Genshin Impact, Fantasian, Call of Duty: Mobile, and more.

Backbone One is powered by your iPhone, so charging is not required. For more information about the Backbone One – PlayStation Edition, visit this link.

The official trailer for the upcoming Apple TV+ original documentary 'Sidney' honouring the life of Hollywood legend Sidney Poitier, has just gone live on YouTube. From producer Oprah Winfrey and directed by Reginald Hudlin, this inspirational documentary honours Poitier and his legacy as an iconic actor, filmmaker, and activist at the center of Hollywood and...
Usman Qureshi
2 hours ago

Airbnb on Tuesday announced the introduction of new anti-party tools in Canada and the U.S. to help prevent unauthorized parties by identifying and declining potentially high-risk reservations. This system looks at factors like history of positive reviews (or lack of positive reviews), length of time the guest has been on Airbnb, length of the trip,...
Nehal Malik
2 hours ago