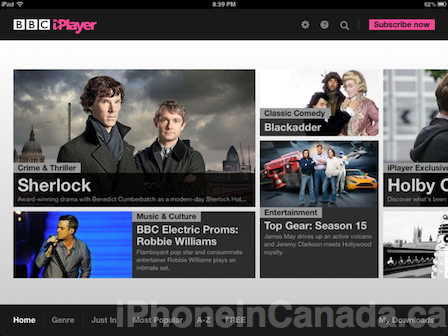 The BBC Worldwide has officially announced the launch date of iPhone and iPod touch versions of their Global iPlayer, set to debut December 8th in Canada, as part of its pilot trial. The iPad-exclusive app launched in Canada five days ago, with a $8.99 CDN monthly subscription price (or $84.99 annually), which we have reviewed. Subscriptions will be accessible for the universal app on all of your iOS devices.

Here’s part of the press release that hit our inbox this morning:

Toronto, Canada, December 6th, 2011-BBC Worldwide, the BBC’s commercial arm, has announced that the global BBC iPlayer App will be available on iPhone and iPod Touch in Canada as part of its pilot trial. The app, which is free to download, will be available at the iTunes App Store (www.itunes.com/appstore) from December 8th.

John Smith, Chief Executive of BBC Worldwide commented: “The global BBC iPlayer has seen great growth since the pilot first launched in July – both in terms of geographical expansion and technological developments. Moving to iPhone and iPod Touch allows us to take the service to a significant new potential audience and deliver fantastic programme content from the BBC and the UK’s creative industry.”

In a keynote speech to the Digital TV Summit this morning, Jana Bennett, President Worldwide Networks and Global BBC iPlayer, said, “This platform extension shows how Global iPlayer isn’t just about moving TV to tablet devices, it’s also about a mobile strategy – about truly getting TV everywhere in a way that it hasn’t been before. We also want the global BBC iPlayer to be truly representative of the whole gamut of British creative output, to represent everything that is great about British content – not just the Best of British TV but the Best of British Culture.”

The BBC iPlayer app works over 3G and WiFi, and brings AirPlay capability for streaming to your Apple TV (2nd ten) or compatible wireless speakers.

Who’s excited for this? At $8.99/monthly, that rivals other all-you-can-eat streaming services such as Netflix. However, many feel the access to the BBC’s library is worth the price. What do you think?