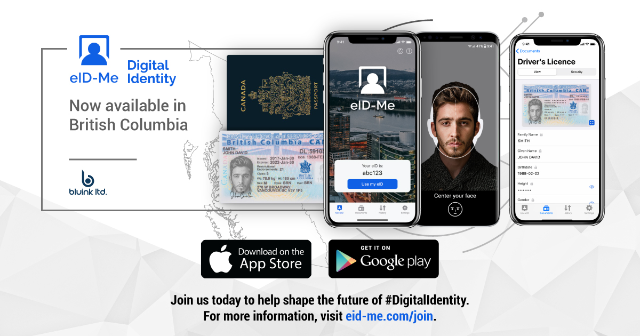 After launching its digital ID app in Ontario and Quebec earlier this year, Ottawa-based Bluink has announced this morning its eID-Me app for iOS and Android is now available in British Columbia.

The following sticker-free cards from B.C. are now supported in the app:

The eID-Me app also supports Canadian passports to be scanned, which are required by the app to verify your identity. According to Bluink, a Canadian passport is required because the NFC chip in the latter can be authenticated, but barcodes from driver’s licenses and identity cards can be faked.

The company says there’s a known issue where the BC Services Card uses the BC Health Card rendering.

Bluink says support for address stickers on ID cards (usually when a resident changes resident address) aren’t supported because they can’t be verified, but they say a solution is being worked on.

Scanned cards are stored locally on devices and the app acts as a secure digital wallet to be used for online and offline identity transactions.

“Bluink’s mission is to empower people and businesses by making secure access simple using strong identities,” says Steve Borza, CEO of Bluink, in an issued statement to iPhone in Canada.

Other updates today include improved French localization, a better settings UI for iOS and other bug fixes and improvements.