Last month we told you about a notorious Richmond, B.C., woman, who was pulled over by RCMP after nearly colliding with a cruiser, had accumulated a whopping 12 distracted driving tickets since 2011. 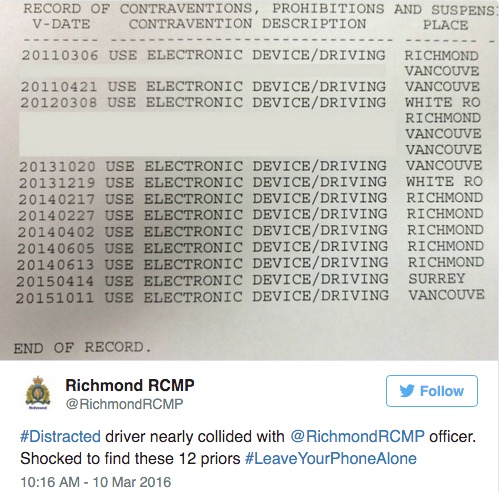 Well, it turns out the number 14 is unlucky for her, as Richmond RCMP reports she has been “prohibited from driving”, after accumulating even more distracted driving tickets.

Do you recall the #distracted driver we tweeted about? They are now prohibited
from driving. #LeaveYourPhoneAlonehttps://t.co/SJ32lhE67i

The RCMP did not mention how long her ban would last, but the news left many residents happy, while some questioned whether she would just return the road anyways.

B.C. distracted driving fines are $167, some of the lowest in Canada, and also come with three demerits. Ontario drivers face $400 fines, while those in PEI face $500 to $1200 fines per offence.