B.C. Senior Gets Distracted Driving Ticket for iPhone Charging in Cupholder [u] 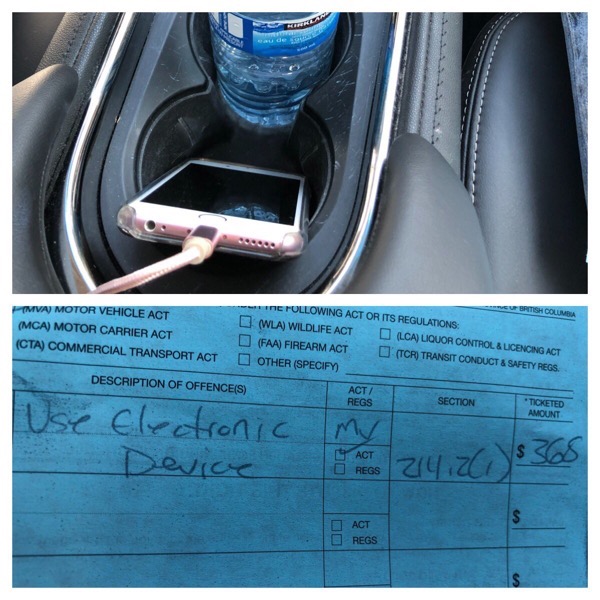 According to Vancouver resident Trevor Kramer, his mother was recently issued a distracted driving ticket for having her iPhone charging—in her vehicle’s cupholder.

“My mom is in her 70s, has never had a single ticket in 50+ years of driving in BC. Today, she got a $368 ticket for having her phone visible (plugged in while connected to Bluetooth for voice / SMS). She wasn’t looking at / touching it,” said Kramer on Twitter, reaching out to Vancouver criminal lawyer, Kyla Lee.

A photo posted by Kramer shows a rose gold iPhone charging in a car’s cupholder, along with a picture of his mother’s $368 ticket.

“She was stopped at a red light at Georgia and Hornby and he was standing there on the sidewalk peering into cars, presumably on the search for mobile devices, regardless of where they were positioned. He knocked on her window and she initially thought he was a panhandler,” explained Kramer.

“She says had both of her hands on her steering wheel and was looking forward, until he distracted her to give her a ticket for having a mobile device that she wasn’t even looking at or touching at the time,” added Kramer, according to CityNews1130.

“As he handed her the ticket, she told the officer that it was her first one ever and he just looked at her,” said Kramer.

It’s totally arbitrary and nonsensical for @VancouverPD @VPDTrafficUnit to suggest that charging a device in a cup holder is in any way less safe than it would be mounted on the dash in the driver’s line of sight. Picking on seniors like my mom does not make our roads safer.

According to the case R. vs Partridge in BC Supreme Court, the latter ruled, “mere presence of a cell phone within sight of a driver is not enough to secure a conviction.” This case was won by lawyer Kyla Lee.

The distracted driving case has been getting a lot of media attention in Vancouver.

Thanks for bringing such incredible high profile attention to the case of my mom’s unfair @VPDTrafficUnit @VancouverPD ticket for the alleged offence of charging her phone in her car’s cupholder while she focused on driving, @smacdonald__ @GlobalBC. cc: @steeletalk @IRPlawyer pic.twitter.com/lEY8DUM2nQ

Vancouver Police Constable Steve Addison told News1130 while he doesn’t know the exact details of this case, he added “there is precedent that says a person can be ticketed for using [an] electronic device even if they are not touching it.”

“This would apply if a device is turned on, within reach of the driver, and causing the driver to be distracted,” said Addison.

What do you think about this distracted driving ticket issued by VPD?

Update Oct. 2, 2019: According to Global News, the Vancouver Police Department has cancelled the ticket and apologized:

Vancouver police confirmed the ticket had been voided, meaning it will not be forwarded to ICBC. Police would not comment further on the matter.

I am happy to report that Vancouver Police have cancelled the ticket issued to Ms. Kramer this week. I’m also totally impressed by @tkhereandthere and his advocacy for his mother.