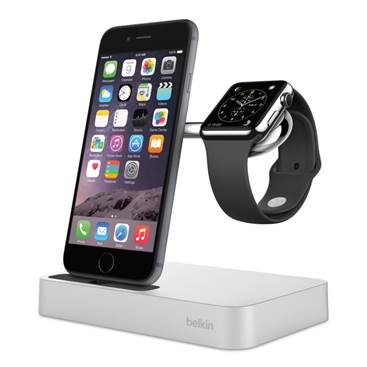 Belkin has today announced a new, innovative Charge Dock that lets you simultaneously charge your iPhone and Apple Watch. The dock features an integrated magnetic charger for the Apple Watch in addition to a Lightning connector for the iPhone. Best of all, an adjustable dial on the back of the dock conveniently lowers and raises the Lightning connector to fit the iPhone with a variety of cases.

“Belkin is proud to introduce a charging solution in which we collaborated with Apple to ensure that the functionality and design aesthetically fit within the Apple ecosystem, while also serving as an elegant stand to display and conveniently store and charge both devices” said Melody Tecson, Director of Product Management at Belkin.

The Belkin Charge Dock for Apple Watch + iPhone  (USD $129.99) features a metal arm with chrome finish that securely holds the Apple Watch at a perfect angle for visibility and easy access, while the solid cast metal base adds stability when the devices are docked.