Best iPhone 7 Car Mount: iOttie Easy One Touch 2 for 50% Off from Amazon

Just picked up a brand new iPhone 7 or iPhone 7 Plus (or still waiting for Jet Black like everybody else)? Then you’re going to need an awesome car mount, if you don’t have one already.

One of the best iPhone (and any other smartphone) car mounts out there is the iOttie Easy One Touch 2, which just went on sale on Amazon.ca for 50% off at $17.99, as part of a one-day Lightning Deal.

This is the lowest price ever on Amazon.ca for this car mount, according to price tracker CamelCamelCamel. 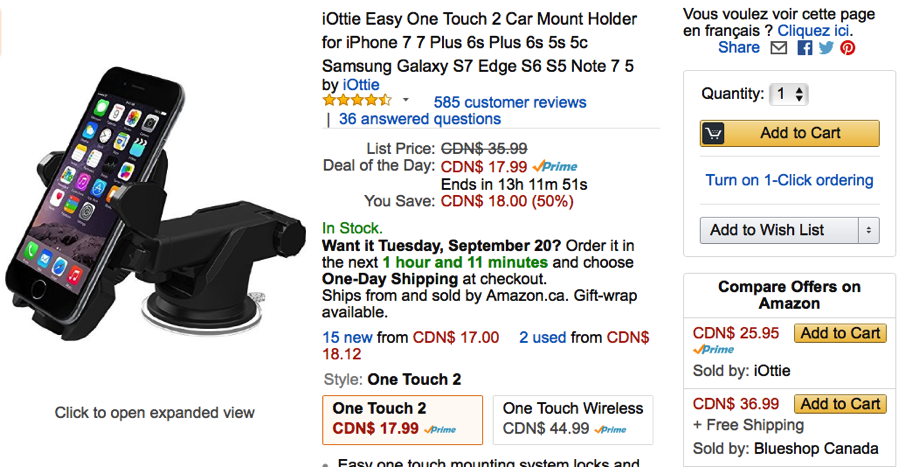 We bought this car mount nearly two years ago and it’s still holding up strong for our iPhone 6s Plus (and soon to be iPhone 7 Plus). It has never fallen off our windshield (thanks to its sticky gel pad that’s part of the suction) and its one-handed operation to mount and unmount our iPhone has worked flawlessly still.

The iOttie Easy One Touch 2 has a telescopic arm, plus it can adjust in all sorts of different angles and even sit in landscape. We’ve recommended this car mount before, and other readers have similarly enjoyed using it. You can’t go wrong with this car mount for your iPhone 7 or iPhone 7 Plus.

Click here to jump on the iOttie Easy One Touch 2 from Amazon.ca while it’s still available. The sale ends in 13 hours or so and it qualifies for free shipping if your order is $25 or higher, plus is Prime eligible.