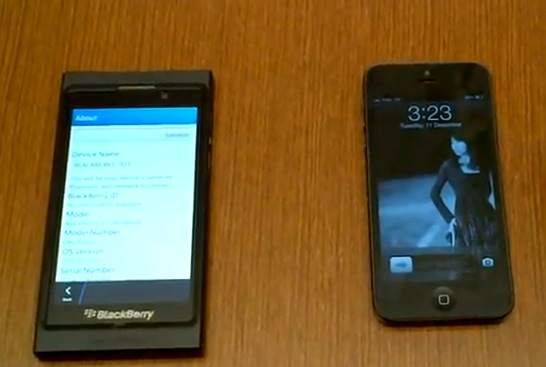 RIM recently sent out their media invites to their BlackBerry 10 launch event set for January 30th. This is seen by many as RIM’s possible comeback into the smartphone game, which they had dominated before the launch of the iPhone.

Over at Gadget Masters (via N4BB), they have posted a browser speedtest comparing the new BlackBerry 10 against the latest iPhone 5. The BlackBerry is still a Dev Alpha B running the 10.0.9.1103 OS and was connected to a mobile hotspot from a BlackBerry 9900 on Fido, whereas the iPhone 5 was also connected to 3G on Fido.

The BB10 browser does appear to be faster than the iPhone 5, but we would have liked to see other sites being loaded as well for a better overall comparison. At the 2:35 mark, you can see mobile Safari refreshing the image gallery smoother and faster than the BlackBerry browser.

If that video doesn’t tickle your fancy, here’s another showdown with the BlackBerry 10 against Windows Phone 8 (HTC 8X) over Wi-Fi:

BlackBerry 10 looks to have a capable web browser. It only took RIM over a decade to figure it out. Thoughts?