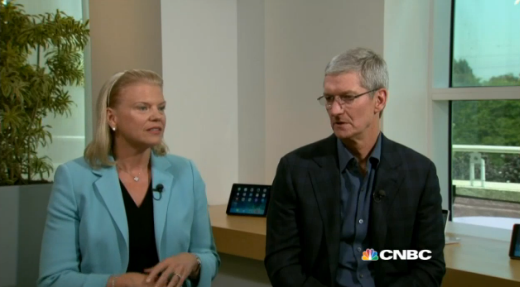 Last week Apple and IBM announced a major partnership to bring more iOS devices to the enterprise and to implement mobile solutions geared towards big businesses.

The deal sent BlackBerry’s stock down 10% the next trading day, but CEO John Chen, in a recent interview with the Financial Times, is not worried about the Apple-IBM deal at all.

In fact, he compared the deal to when “two elephants start dancing”, referring to how both companies “are used to taking charge” and might not be able to executive as quickly as they think:

“The IBM-Apple tie-up validates what is a huge market,” he said. “[But] the bad news is that you are waking up two giants. It’s competition but it’s good competition and we are going to be more nimble. You don’t want to be a strong guy in a market that is not growing.”

Chen went on to say BlackBerry is working on partnerships of their own, and the company is more nimble than the likes of Apple and IBM:

“I am working on some, and maybe we will collaborate with others. If I focus on security and identity management then we will be a good solid partner in this enterprise world.

“I am not afraid of competing when I know I am more nimble. I never think [that] going alone is the right strategy. But we have a value add that no one else can do.”

BlackBerry will focus its attention on enterprise consumers over its consumer business, as the CEO says its restructuring plans are almost complete. The company’s upcoming Passport smartphone, built with a square design is being targeted towards enterprise customers core industries such as financial services or healthcare.

There’s nothing else to say, but other than John Chen is awesome when it comes to quotes on the record.

Dell Not Worried about Apple-IBM Deal, Either

Dell similarly scoffed at the Apple-IBM deal as well, with John Swainson, chief of the company’s global software business, telling Reuters “I do not think that we take the Apple-IBM tie-up terribly seriously. I think it just made a good press release.”

Swainson, a former senior employee from IBM, said he can’t comprehend how ‘Big Blue’ will be able to help Apple:

“I have some trouble understanding how IBM reps are going to really help Apple very much in terms of introducing devices into their accounts. I mean candidly, they weren’t very good at doing it when it was IBM-logoed products, so I do not get how introducing Apple-logoed stuff is going to be much better.”

He believes while Apple’s products are more enticing, they lack security features large enterprise clients such as banks demand.

Some have pondered a possible BlackBerry-IBM partnership, but both companies declined to talk about such a deal. Speculation of a deal took place back in 2013 when both companies were looking into buyouts.

Swainson and Chen have history together, as both men were former advisors at private equity firm Silver Lake; the latter, along with Dell founder, Michael Dell, wanted to turn Dell into a private company around the same time.

Apple and IBM look fantastic on paper and given Tim Cook’s textbook reign of his company right now, you know good things will come out of this. BlackBerry and Dell should be downplaying the partnership for their own self preservation, as expected. But in the end, the numbers won’t lie.