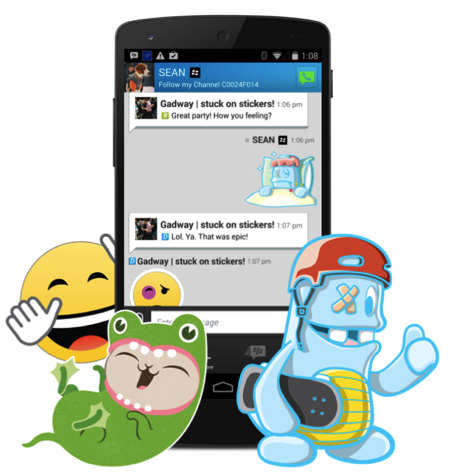 Earlier this month, Blackberry released an improved version of BBM for iOS and Android as update 2.0 which introduced features like BBM Voice and BBM Channels among others and today, the company has announced that it is bringing stickers to its multi platform chat application, which will be available for purchase via a new BBM Shop deployed within the BBM app.

“Unlike emoticons, stickers are bolder, more beautiful images that you can add right in to your chat. Stickers are downloaded in packs available for purchase from the new BBM Shop – found right inside BBM. Each sticker pack will contain between 20-25 stickers relating to a theme or a character like CosCat, Gilbert’s Tales, Bubble Bot and more (we can’t wait for you to meet the whole gang!).”

It seems that BlackBerry will be partnering with brands on some of BBM’s sticker packs, as well as introducing some original characters, with each pack containing between 10 to 25 individual stickers. The BBM Shop will also offer some free sticker collections, including the legacy BBM emoticons blown up for additional emotional power.

Both stickers and the BBM Shop are launching today in a limited external beta, which means that you could be sticking them to your friends and family pretty soon.