What should we expect from Apple’s special event in New York City next week? Mark Gurman from Bloomberg reports we can see new iPad Pro models plus a successor to the MacBook Air, and Mac mini:

The main news on Tuesday will be revamped iPad Pros with Face ID and a new charging port, a new laptop destined to replace the aging MacBook Air, and a new Mac mini geared toward professional users, according to people familiar with the plans. They asked not to be identified discussing unannounced products.

Apple originally launched the iPad Pro back in 2015. The new 2018 model will have iPhone X design cues, such as an edge-to-edge display with slimmer bezels, while also sport a USB-C connector instead of Lightning for charging, for the first time on an iOS device. The sides of the device will look “more squared-off”, similar to the iPhone 5 and iPhone 5S design from years back. 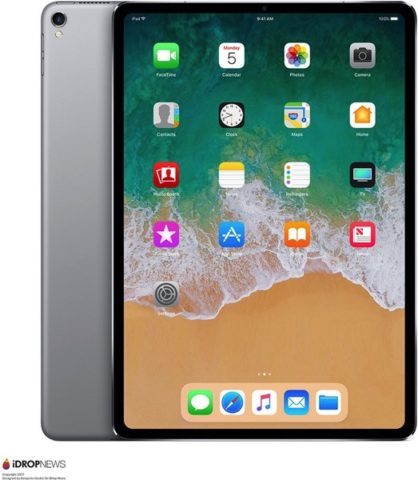 The new displays will be LCD instead of OLED, but will support Face ID (and Animojis of course), which will be able to “work in both portrait and landscape orientations,” explains Gurman.

These new iPad Pros will include a version of the A12 Bionic CPU found within iPhone XS and iPhone XR. Maybe A12 X Bionic? Unnamed sources also mention a custom Apple graphics chip will debut for the first time, but in an iPad.

There will also be an updated version of Apple Pencil as well. Many expect this new version to have easy pairing like Apple’s popular AirPods.

Gurman reports a new successor to the popular but aging MacBook Air will be announced, with a higher-resolution display and slimmer bezels. Let’s hope this is a Retina display for MacBook Air many have waited years for.

As for the Mac mini, it will reportedly gain new processors and features, aimed at professional users (and probably a higher price), as this update will be the first in four years for the portable Mac.

Bloomberg also reports refreshed iMac, iMac Pro and 12-inch MacBook models with newer and faster processors are being worked but, and some of these “could be ready for the October launch.”

The details revealed in Bloomberg’s report pretty much corroborate what was earlier reported by 9to5Mac’s Guilherme Rambo, who first discovered a new iPad Pro with Face ID, as leaked within iOS 12 code.

Apple is set to hold its New York City special event on Tuesday, October 30, 2018. The event will be again live streamed by Apple on its website and viewable on Apple TV, and Safari on iOS and Mac devices.