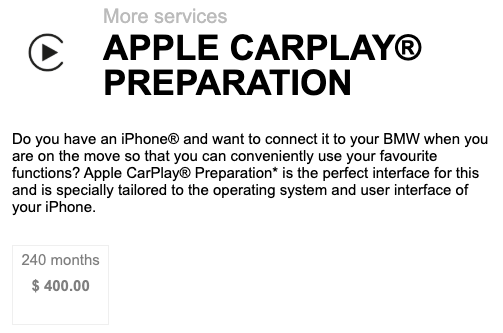 After BMW announced yesterday it would be making Apple CarPlay free for new vehicles in the U.S. and UK, BMW Canada has now clarified the costs involved for Canadian BMW owners.

BMW Canada’s director of corporate communications, told iPhone in Canada in a statement, as of December 4, 2019, Apple CarPlay preparation subscriptions “will be available for an unlimited time at no additional cost for new vehicles.”

For existing vehicles with an active Apple CarPlay preparation subscription, their terms will be changed to unlimited, added the spokesperson.

BMW vehicles that had Apple CarPlay preparations expired and not renewed, “will automatically have this activated by BMW for an unlimited time.”

Furthermore, for BMW Canada customers who purchased an extended Apple CarPlay subscription, such as the 240 months option at $400 CAD, the company will now provide a prorated refund (plus taxes) to the credit card used to make the purchase, prior to December 4, 2019.

BMW Canada tells iPhone in Canada these refunds will be handled internally, and customers who qualify for a refund can expect to see it by January, 2020.

In a nutshell, BMW has heard its customers loud and clear—they don’t want to pay for Apple CarPlay when the latter software is offered free to automakers. Good on the company for making this change.