Breaking Down the iPhone 4 Reception Issues

So it looks like the iPhone 4 reception saga continues. Early iPhone 4 users in the USA reported of imminent signal degradation when they held their iPhones in the bottom left hand corner. As more users get their hands on the iPhone 4, this issue is becoming extremely widespread.

Have an issue with your iPhone 4? Feel helpless? What should you do? Email the Apple CEO, Steve Jobs! This is exactly what two iPhone 4 early adopters did. Here is one email transcript (via 9to5Mac):

So, um, just got my iPhone 4. Its lovely and all, but this ‘bridge the two antennae to kill your reception’ thing seems to be a bit serious. If I bridge them with my hand or with a piece of metal the bars slowly drop to ‘Searching…’ and then ‘No Service’.

Its kind of a worry. Is it possible this is a design flaw?

I texted someone from the phone and noticed reception dropping as I texted, down to ‘No Service’, so I emailed again:

Actually, its not calls that concern me, but i’ve just been writing a text and its very natural for me as a right-handed person to hold it that way, with the part of my hand at the base of my thumb covering the point the antennae meet, and it kills the reception each time.

I mean, pretty much as soon as i move my hand it comes back, but its pretty crazy… is this the reason Bumpers exist?

Another one liner from Steve Jobs:

Just don’t hold it that way then.

Well, yeah, thats what i’ll do, but you have to admit thats a workaround, yeah? I mean, normally there aren’t limits to how you can hold a phone.
I seriously dig the phone, its totally amazing, but I think this is what many would call a design flaw.

Sure there are – every phone has these areas of sensitivity, depending on the location of the antenna. Some phones even ship with labels warning customers to not cover certain areas with their hands.

Here is another email sent from iPhone users Aram (via Engadget): 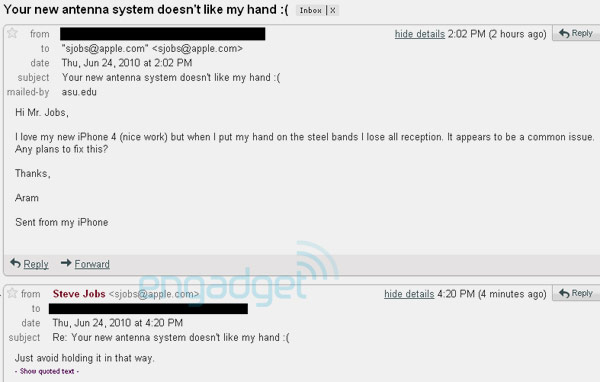 The reply from Steve Jobs? “Just avoid holding it in that way.”

Hereâ€™s an official response from Apple PR, that was sent to Engadget:

Gripping any mobile phone will result in some attenuation of its antenna performance, with certain places being worse than others depending on the placement of the antennas. This is a fact of life for every wireless phone. If you ever experience this on your iPhone 4, avoid gripping it in the lower left corner in a way that covers both sides of the black strip in the metal band, or simply use one of many available cases.

Apple’s Response is Telling You to Mold to the iPhone 4, Not the Other Way Around

These responses are flabbergasting. iPhone 4 users are supposed to adopt other hand held positions to make up for the antenna’s location in the bottom of the phone? When I held my original iPhone and smothered the bottom antenna with my hand, I never ran into reception issues. Nor did I encounter problems with my iPhone 3G or 3GS. It looks like this new design might be flawed. But don’t you think Apple, with its infinite resources would do substantial testing of the iPhone 4? Maybe because they never had the iPhone 4 out in the open, and it was always tested in a case?

What I would like to see are the review from International iPhone 4 users in France, Germany, the UK, and Japan. If they can replicate these problems–then Apple will have one giant PR disaster to deal with.

What about the high profile press reviewers that examined the iPhone 4 for over a week? Did they run into this signal drop problem as well? I think it’s a combination of the pathetic AT&T network and the overall antenna design of the iPhone 4. Married together, it’s a dangerous relationship that is bound straight for divorce.

When the iPhone 4 comes to Canada (hopefully soon, right?), by that time this issue will be fixed–either by Apple, or the ‘superior’ cell coverage we experience in Canada.

What an Antenna Expert Thinks: Blame it on the FCC

John Gruber from Daring Fireball linked to a piece written by Spencer Webb, from AntennaSys, which does antenna design, integration, and consulting:

Just about every cell phone in current production has the antenna located at the bottom. This insures that the radiating portion of the antenna is furthest from the head. Apple was not the first to locate the antenna on the bottom, and certainly wonâ€™t be the last. The problem is that humans have their hands below their ears, so the most natural position for the hand is covering the antenna. This canâ€™t be a good design decision, can it? How can we be stuck with this conundrum? Itâ€™s the FCCâ€™s fault.

This is interesting. The antenna’s bottom placement is in accordance to FCC regulations to comply with maintaining consistently lower SAR (Specific Absorbtion Rate) ratings versus placement up top. In other words, it’s safest to have the antenna as further away from your head as possible.

How will Apple respond to the growing torrent of reception concerns? Should they offer discounted or complimentary Bumper cases? Start recalling iPhone 4s? Or should we all just start holding the iPhone 4 in a ‘different way’? 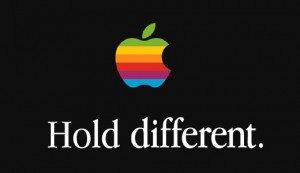 Here’s an image created and submitted to Reddit (thanks Chantelle!) in reply to Apple’s response: 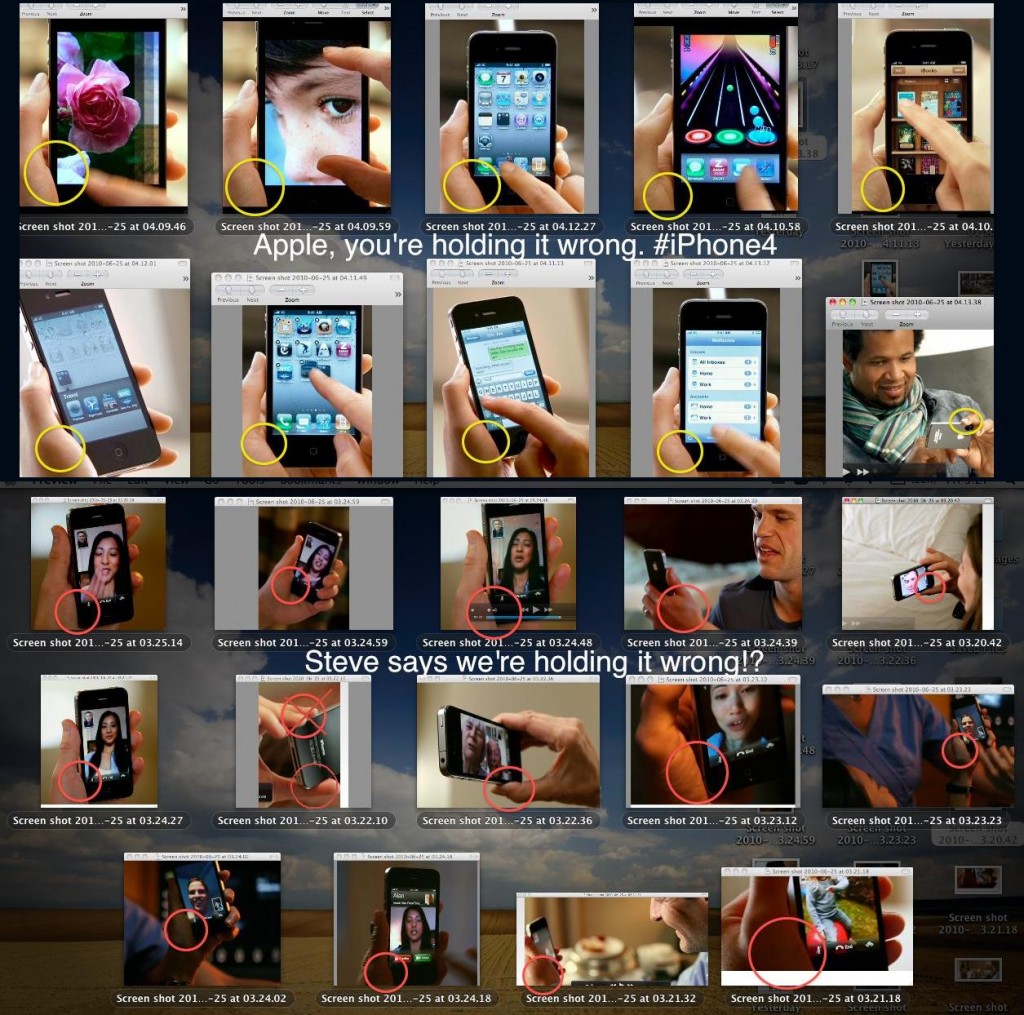