For those living in Brossard, Quebec, get ready for an Apple Store opening inside the Mail Champlain mall. As noted by ifoAppleStore, Apple’s retail job page has listed numerous retail positions for a new store in Brossard, south west across the St. Lawrence river from Montreal. This will mark the fifth Apple Store for Quebec, with Laval, Sainte-Catherine, Pointe Claire and Quebec City having the other locations. The Brossard store will mark the 26th Apple Store in Canada.

We checked Apple’s retail job postings and as you can see below, it’s definitely going to happen: 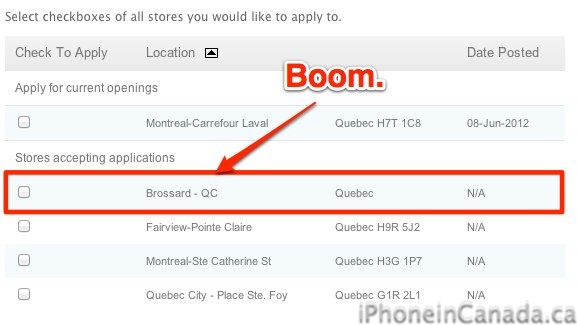 The store is set to open by year’s end, but the exact retail spot within the mall is unknown at this point, but numerous vacant spaces fit for an Apple Store are available. All signs point to the mall run by Ivanhoé Fairview, which ifoAppleStore notes is one of Apple’s frequent management partners.

In a separate story, ifoAppleStore points to further expansion of the Carrefour Laval Apple Store. The existing Apple Store according to sources will move into the existing RW&CO space, with the latter to close or relocate. The additional 4,884 square feet will bring the total expanded store to 10,979 square feet, which will be a massive Apple Store.

Apple Store expansions in Canada are common. Just this past weekend, we saw the re-grand opening of the Market Mall Apple Store in Calgary, as it moved into a much larger retail space within the mall.

For those living in the Metro Montreal region, get ready for more Apple Store square footage coming your way. Who’s excited? If you’re around Brossard, let us know below where you think the location could be within the Mail Champlain mall.

Update: The Apple Store has been confirmed to be at DIX30.