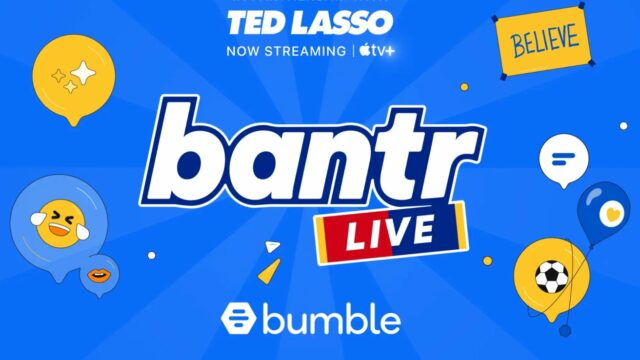 Dating app Bumble is developing and launching Bantr Live, based on the dating app introduced in the hit Apple TV+ series Ted Lasso. The weekly event will be available to all Bumble users for free. Starting October 13th through the end of the year, users across the globe, including Canada, can partake.

In Ted Lasso, characters Rebecca Welton, played by Hannah Waddingham, and Toheeb Jimoh’s Sam Obisanya are shown to be using a fictitious dating app called Bantr. In the series, the app works as a more anonymous version of typical dating apps. Bantr doesn’t show the photos of the other person, creating some anonymity. Now, Bumble is recreating this for a weekly event dubbed Bantr Live.

As announced by the company, Bantr Live events will start on Thursday, October 13th. Each Thursday at 7 pm local time, the Bantr Live event kicks off, creating a bit of a different way to match with other users. Rather than swiping on the profile of other users, they’ll be paired together at random. The person will match with the user’s location, age, and gender preference. However, much like in Ted Lasso, they won’t see each other’s pictures or their profile. The only information available will be a name.

“The premise of Bantr is a dating experience many of our members have expressed interest in over the years,” Bumble global VP of partnerships Olivia Yu says. “Bantr Live enables our community to connect with someone unexpected and learn more about a person before seeing them. We look forward to people on Bumble having fun with Bantr Live and connecting and dating in a new and exciting way.”

Once two users are matched, they’ll have three minutes to get to know each other. During that time, users are encouraged to get to know each other by asking questions. Of course, even though there is a bit more anonymity through Bantr Live, users can still be reported. At the end of the three minutes, each user will be shown a small picture of the other. They’ll then ask whether they’d like to be matched with the other and can select ‘Yes’ or ‘No’. Following that, they have the option to chat with another user at random for three minutes.

Each Bantr Live session will last one hour and conclude at 8 pm local time.

Starting today, Bumble users can sign up for Bantr Live via the Bumble app. To do so, users must tap on the gray hive at the bottom of their screen and then click on the blue stopwatch in the top right-hand corner. There, users can RSVP to the upcoming event, and get notifications when it’s close to the start time. Bumble users will also be able to redeem a two-month subscription to Apple TV+ to watch Ted Lasso if they are new subscribers.

Bantr Live events will run until the end of the year. It will be available in Canada, the U.S., the U.K., and Australia.

December 1st marks World AIDS Day and Apple is continuing to support Global Fund in its worldwide fight to stop AIDS. In doing so, Apple Stores around the world are promoting (PRODUCT)RED displays and products. Additionally, Apple is promoting apps, videos, and other materials on its products to help increase visibility. Since 2006, Apple has...
Steve Vegvari
15 hours ago