When I first bought my first gen iPhone, it involved driving down to Alderwood Mall in Seattle, WA to visit the Apple Store. At the time, 1.1.1 firmware was JUST released. That didn’t stop me from buying an 8GB iPhone and bringing it back to Canada for the tedious process of jailbreaking and unlocking.

If you’ve been waiting to buy an iPhone 3G it looks like US Apple stores are giving Canadians and Americans another chance. A recent rumor about Apple stores selling contract-free iPhones was confirmed yesterday by CNNMoney.com. Prices are $599US for the 8GB and $699 for the 16GB model iPhones.

So if you’ve been holding off the iPhone 3G from Rogers and Fido (which recently discontinued 16GB units), this could be your chance. You’ll avoid a lengthy contract with Rogers but you’ll pay the price for the short term. Given the Canadian dollar is no longer at par with the US Greenback, expect to add 20% for the exchange rate and also GST/PST if you are declaring your iPhone 3G at the border.

Yesterday Apple announced the dates for the WWDC 2009. Last year, the iPhone 3G was announced at the WWDC 2008. 9to5Mac has a great post titled “10 Signs Apple is Clearing iPhone 3G Inventory for Next iPhone” and here they are:

1. AT&T is selling refurbs for $99 (again) with activation and plan

2. O2 is giving away free iPhones with their low cost plans (not their expensive plans)

3. AT&T and Apple are now selling iPhones without contract (or second line) knowing that more will go Jailbroken this way. (If you have $600-$700 to spend)

4. France is now selling them unlocked at department stores.

5. China Unicom might get offloaded a few million on May 17th, ahead of new model.

6. AT&T executives have the new models for testing and are so excited they can’t keep their mouths shut.

8. WWDC, the traditional launching pad for new iPhones was announced yesterday. It will be June 8-12th.

9. Remember all of those extra iPhone part numbers found in the 3.0 build? Yeah, those can’t all be Tablets.

10. Steve Jobs is coming back at the end of June. You don’t think he will be empty handed do you?

Traditionally, the only way to get your hands on an iPhone 3G was to sign a contract with your local carrier. This move by Apple indicates they are definitely trying to clear stock. Apple knows what’s up, and they are probably betting that people looking to jailbreak/unlock these contract-free units will nab them up. 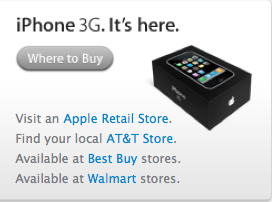 I just hope these contract-free units are still on 2.2 firmware, since the latest 2.2.1 baseband cannot be unlocked! So if you are going down to the US or a friend is helping you out by picking one up, do some online research first to determine if units at your US Apple store are on 2.2 firmware. Nevertheless, I am confident the Dev Team will unlock the 2.2.1 baseband–it’s only a matter of time.