From the creators of the widely popular Camera+ photography app comes an all-new video recording app called REC, which promises to introduce an intuitive design with pro features that can be used by expert videographers and casual shooters alike. 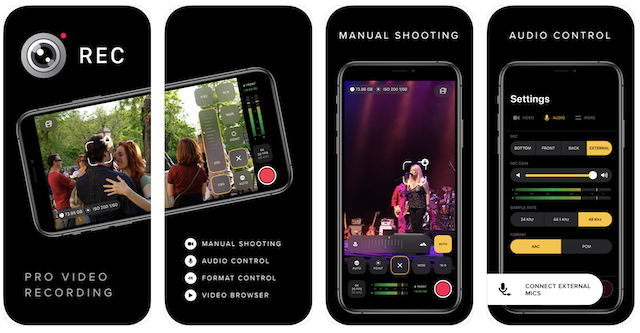 The new REC app provides easy access to resolution, format, codec, and frame rate. Focus and exposure can be set automatically, which works great for a wide variety of situations. REC also offers intuitive touch controls as well as a full manual mode that allows you to select the best settings for your scene and style.

Additional pro-friendly REC features include gain control for external microphones, or the ability to disable the camera stabilizer. You can also lock exposure and white balance when you start recording.

REC’s floating buttons put pro-level controls at your fingertips, and keeps them out of the way while you’re focusing on what’s important, shooting your video! A single tap brings up any of the control menus where you can adjust the white balance, shutter speed, ISO, EV, and focus manually. Quickly swap cameras and formats with a flick of your finger, and your selection is always available at a glance.

REC will be available for $6.49 on July 16th but is available for pre-order right now at a discounted price of $5.49 in the Canadian App Store.