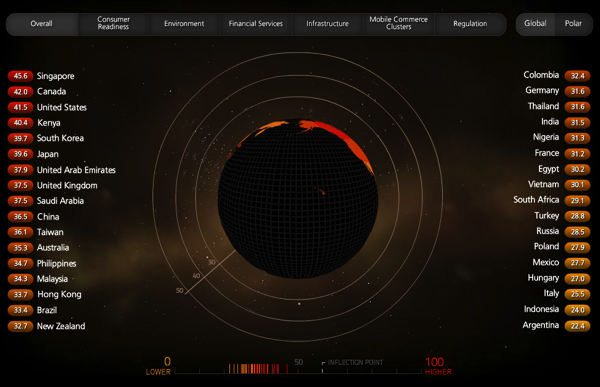 Apple Pay launched in the US first, but Canadians are ready to use their mobile phones to make a purchases. While previous PayPal surveys have already emphasized this fact, there is another factor that Apple and its partners such as MasterCard need to consider when deciding in which country to launch next.

To get a cross sectional view of the global market, MasterCard created a six-tiered mobile readiness index in which a score of 60 out of 100 is described as “normal”, says the WSJ.

Canada is among the top three countries ready for mobile: The PayPal survey assessed consumer readiness, while other surveys have looked into the technical challenges such platforms may face.

Canada ranks second in the MasterCard index, with 42 points, just behind the leader, Singapore, which received 45.6 points. Canada ranks even higher than US (41.5 points) , but the latter is given high marks for environment, because household expenditure per capita is three times the average for other countries.

In other words, Canada is ready for Apple Pay. Now, the question is: When will Apple finalize the terms with local banking partners?

The AI-driven chatbot GPT-3 from OpenAI has passed the final exam for the Wharton School's Master of Business Administration (MBA) program, NBC News is reporting. University of Pennsylvania professor Christian Terwiesch, who authored the research paper "Would Chat GPT3 Get a Wharton MBA?," said the bot scored between a B- and B on the exam. The bot's...
Usman Qureshi
31 mins ago

Designers from all around the world entered Freelancer.com's global design contest offering $500 AUD to the best conceptualization of Apple's upcoming AR/VR headset. After receiving numerous submissions, Freelancer.com chose a detailed render created by Ahmed Chenni, a freelance 3D artist from Ain Azel, Algeria, as the winner. “Our contests are a great way to crowdsource...
Usman Qureshi
46 mins ago

Samsung announced on Wednesday its Samsung Wallet will be coming to Canada, by the end of January. “When Samsung launched Samsung Wallet last year, we committed to building the experience through open partnerships with our business and service providers and ensuring access to the platform for as many people as possible,” said Jeanie Han, EVP […]
Gary Ng
1 hour ago