The Pokemon Go craze is real. Even though it’s not available in Canada yet, Canadians can still download Pokemon Go here by using a U.S. iTunes account (follow our instructions here).

According to The Globe and Mail, the game is super popular in Canada, despite not being available here. Based on stats from SimilarWeb, Canadian visitors to apkmirror.com (trying to get the Android version), have surged since Pokemon Go’s launch last weekend. Canada ranks 15th globally in a list of countries visiting the site, that do not have the game yet: 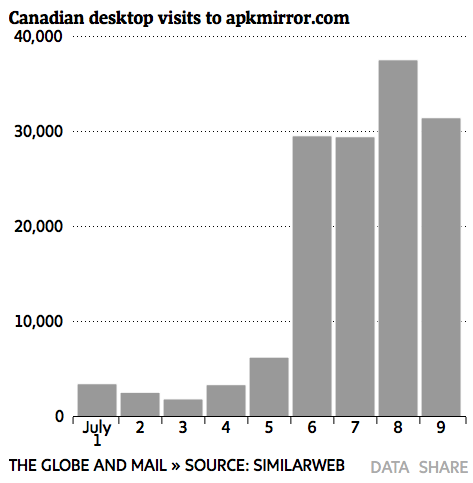 In terms of time spent in-app, Pokemon Go, according to SimilarWeb, has surged past WhatsApp and Instagram, with players spending over 40 minutes per day in the app: 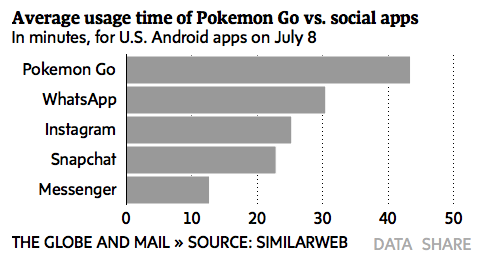 The Canadian Museum for Human Rights in Winnipeg is seeing Pokemon Go users play in the building, with official policy allowing people to continue to play the game—as long as they’re not disturbing other visitors, said spokeswoman Louise Waldman:

“We’re asking players to be mindful and respectful of other visitors at the museum as they play,” she said. “Obviously, this is an emerging technology and it’s one we’re continuing to monitor in the days and the weeks ahead.”

Yesterday, it was reported Pokemon Go players were playing at cemeteries and other inappropriate places around the world.

Pokemon Go expanded to Europe today, as the game is now available in Germany. Earlier, the WSJ reported a staggered roll out of the game is coming to Europe, Japan and other Asian nations this week.

If Pokemon Go were to launch in Canada this week, we would guess it would happen on Thursday, typically seen as the day when major releases and updates hit the App Store. In the meantime, use this simple workaround to download Pokemon Go in Canada.